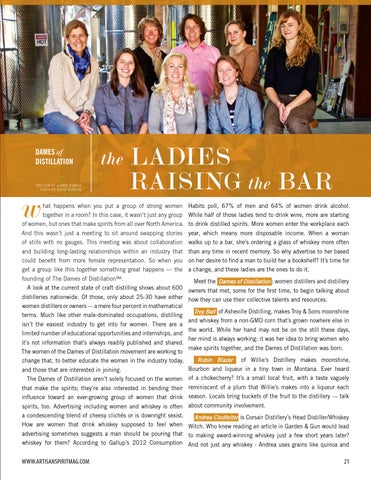 hat happens when you put a group of strong women Habits poll, 67% of men and 64% of women drink alcohol. together in a room? In this case, it wasn’t just any group

While half of those ladies tend to drink wine, more are starting

of women, but ones that make spirits from all over North America. to drink distilled spirits. More women enter the workplace each And this wasn’t just a meeting to sit around swapping stories

year, which means more disposable income. When a woman

of stills with no gauges. This meeting was about collaboration

walks up to a bar, she’s ordering a glass of whiskey more often

and building long-lasting relationships within an industry that

than any time in recent memory. So why advertise to her based

could benefit from more female representation. So when you

on her desire to find a man to build her a bookshelf? It’s time for

get a group like this together something great happens — the

a change, and these ladies are the ones to do it.

founding of The Dames of Distillation™. A look at the current state of craft distilling shows about 600

Meet the Dames of Distillation : women distillers and distillery

owners that met, some for the first time, to begin talking about distilleries nationwide. Of those, only about 25-30 have either how they can use their collective talents and resources. women distillers or owners — a mere four percent in mathematical Troy Ball of Asheville Distilling, makes Troy & Sons moonshine terms. Much like other male-dominated occupations, distilling and whiskey from a non-GMO corn that’s grown nowhere else in isn’t the easiest industry to get into for women. There are a the world. While her hand may not be on the still these days, limited number of educational opportunities and internships, and her mind is always working: it was her idea to bring women who it’s not information that’s always readily published and shared. make spirits together, and the Dames of Distillation was born. The women of the Dames of Distillation movement are working to Robin Blazer of Willie’s Distillery makes moonshine, change that, to better educate the women in the industry today, and those that are interested in joining. The Dames of Distillation aren’t solely focused on the women

Bourbon and liqueur in a tiny town in Montana. Ever heard of a chokecherry? It’s a small local fruit, with a taste vaguely

that make the spirits; they’re also interested in bending their reminiscent of a plum that Willie’s makes into a liqueur each influence toward an ever-growing group of women that drink season. Locals bring buckets of the fruit to the distillery — talk spirits, too. Advertising including women and whiskey is often

a condescending blend of cheesy clichés or is downright sexist.

How are women that drink whiskey supposed to feel when

Witch. Who knew reading an article in Garden & Gun would lead

advertising sometimes suggests a man should be pouring that

to making award-winning whiskey just a few short years later? whiskey for them? According to Gallup’s 2012 Consumption And not just any whiskey - Andrea uses grains like quinoa and