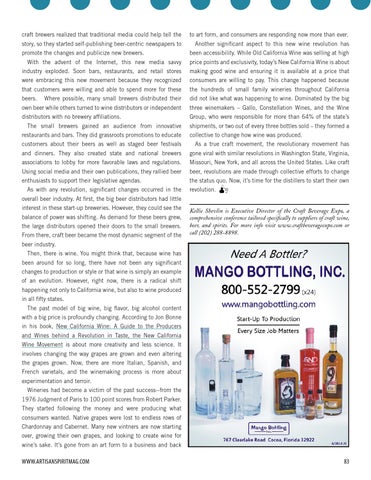 craft brewers realized that traditional media could help tell the

to art form, and consumers are responding now more than ever.

story, so they started self-publishing beer-centric newspapers to

Another significant aspect to this new wine revolution has

been accessibility. While Old California Wine was selling at high

With the advent of the Internet, this new media savvy

price points and exclusivity, today’s New California Wine is about

were embracing this new movement because they recognized

consumers are willing to pay. This change happened because

that customers were willing and able to spend more for these

the hundreds of small family wineries throughout California

Where possible, many small brewers distributed their

did not like what was happening to wine. Dominated by the big

own beer while others turned to wine distributors or independent

distributors with no brewery affiliations.

Group, who were responsible for more than 64% of the state’s

The small brewers gained an audience from innovative restaurants and bars. They did grassroots promotions to educate

shipments, or two out of every three bottles sold – they formed a collective to change how wine was produced.

customers about their beers as well as staged beer festivals

As a true craft movement, the revolutionary movement has

and dinners. They also created state and national brewers

associations to lobby for more favorable laws and regulations.

Missouri, New York, and all across the United States. Like craft

Using social media and their own publications, they rallied beer

beer, revolutions are made through collective efforts to change

enthusiasts to support their legislative agendas.

the status quo. Now, it’s time for the distillers to start their own

As with any revolution, significant changes occurred in the

overall beer industry. At first, the big beer distributors had little interest in these start-up breweries. However, they could see the balance of power was shifting. As demand for these beers grew, the large distributors opened their doors to the small brewers. From there, craft beer became the most dynamic segment of the

Kellie Shevlin is Executive Director of the Craft Beverage Expo, a comprehensive conference tailored specifically to suppliers of craft wine, beer, and spirits. For more info visit www.craftbeverageexpo.com or call (202) 288-8898.

beer industry. Then, there is wine. You might think that, because wine has been around for so long, there have not been any significant changes to production or style or that wine is simply an example of an evolution. However, right now, there is a radical shift happening not only to California wine, but also to wine produced in all fifty states. The past model of big wine, big flavor, big alcohol content with a big price is profoundly changing. According to Jon Bonne in his book, New California Wine: A Guide to the Producers and Wines behind a Revolution in Taste, the New California Wine Movement is about more creativity and less science. It involves changing the way grapes are grown and even altering the grapes grown. Now, there are more Italian, Spanish, and French varietals, and the winemaking process is more about experimentation and terroir. Wineries had become a victim of the past success--from the 1976 Judgment of Paris to 100 point scores from Robert Parker. They started following the money and were producing what consumers wanted. Native grapes were lost to endless rows of Chardonnay and Cabernet. Many new vintners are now starting over, growing their own grapes, and looking to create wine for wine’s sake. It’s gone from an art form to a business and back