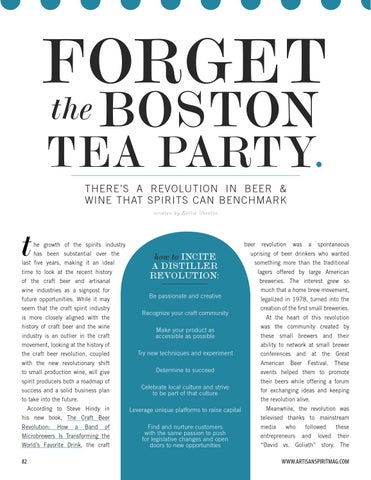 he growth of the spirits industry has been substantial over the

A DISTILLER REVOLUTION: Be passionate and creative Recognize your craft community Make your product as accessible as possible Try new techniques and experiment

spirit producers both a roadmap of success and a solid business plan to take into the future. According to Steve Hindy in

Microbrewers Is Transforming the World’s Favorite Drink, the craft

something more than the traditional lagers offered by large American breweries. The interest grew so much that a home brew movement, legalized in 1978, turned into the creation of the first small breweries. At the heart of this revolution was the community created by these small brewers and their conferences and at the Great Beer

events helped them to promote their beers while offering a forum for exchanging ideas and keeping the revolution alive. Meanwhile, the revolution was televised thanks to mainstream

uprising of beer drinkers who wanted

with the new revolutionary shift to small production wine, will give

ability to network at small brewer

movement, looking at the history of the craft beer revolution, coupled

“David vs. Goliath” story. The