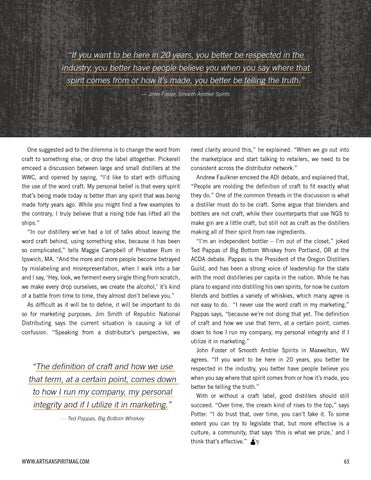 “If you want to be here in 20 years, you better be respected in the industry, you better have people believe you when you say where that spirit comes from or how it’s made, you better be telling the truth.” — John Foster, Smooth Ambler Spirits

need clarity around this,” he explained. “When we go out into

craft to something else, or drop the label altogether. Pickerell

the marketplace and start talking to retailers, we need to be

emceed a discussion between large and small distillers at the

consistent across the distributor network.”

WWC, and opened by saying, “I’d like to start with diffusing

Andrew Faulkner emceed the ADI debate, and explained that,

the use of the word craft. My personal belief is that every spirit

“People are molding the definition of craft to fit exactly what

they do.” One of the common threads in the discussion is what

made forty years ago. While you might find a few examples to

a distiller must do to be craft. Some argue that blenders and

the contrary, I truly believe that a rising tide has lifted all the

bottlers are not craft, while their counterparts that use NGS to

make gin are a little craft, but still not as craft as the distillers

making all of their spirit from raw ingredients.

word craft behind, using something else, because it has been

“I’m an independent bottler – I’m out of the closet,” joked

so complicated,” tells Maggie Campbell of Privateer Rum in

Ted Pappas of Big Bottom Whiskey from Portland, OR at the

Ipswich, MA. “And the more and more people become betrayed

ACDA debate. Pappas is the President of the Oregon Distillers

by mislabeling and misrepresentation, when I walk into a bar

Guild, and has been a strong voice of leadership for the state

and I say, ‘Hey, look, we ferment every single thing from scratch,

with the most distilleries per capita in the nation. While he has

we make every drop ourselves, we create the alcohol,’ it’s kind

plans to expand into distilling his own spirits, for now he custom

of a battle from time to time, they almost don’t believe you.”

blends and bottles a variety of whiskies, which many agree is

not easy to do. “I never use the word craft in my marketing,”

so for marketing purposes. Jim Smith of Republic National

Pappas says, “because we’re not doing that yet. The definition

Distributing says the current situation is causing a lot of

of craft and how we use that term, at a certain point, comes

confusion. “Speaking from a distributor’s perspective, we

down to how I run my company, my personal integrity and if I utilize it in marketing.” John Foster of Smooth Ambler Spirits in Maxwelton, WV

“The definition of craft and how we use that term, at a certain point, comes down to how I run my company, my personal integrity and if I utilize it in marketing.” — Ted Pappas, Big Bottom Whiskey

agrees. “If you want to be here in 20 years, you better be respected in the industry, you better have people believe you when you say where that spirit comes from or how it’s made, you better be telling the truth.” With or without a craft label, good distillers should still succeed. “Over time, the cream kind of rises to the top,” says Potter. “I do trust that, over time, you can’t fake it. To some extent you can try to legislate that, but more effective is a culture, a community, that says ‘this is what we prize,’ and I think that’s effective.”