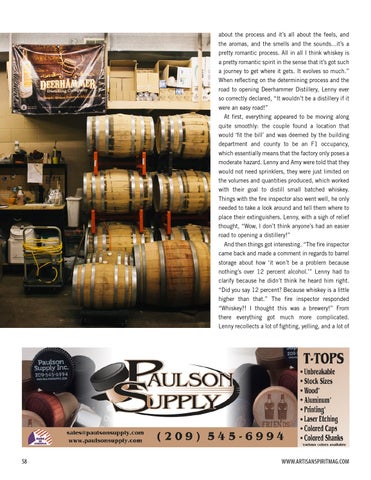 about the process and it’s all about the feels, and the aromas, and the smells and the sounds...it’s a pretty romantic process. All in all I think whiskey is a pretty romantic spirit in the sense that it’s got such a journey to get where it gets. It evolves so much.” When reflecting on the determining process and the road to opening Deerhammer Distillery, Lenny ever so correctly declared, “It wouldn’t be a distillery if it were an easy road!” At first, everything appeared to be moving along quite smoothly: the couple found a location that would ‘fit the bill’ and was deemed by the building department and county to be an F1 occupancy, which essentially means that the factory only poses a moderate hazard. Lenny and Amy were told that they would not need sprinklers, they were just limited on the volumes and quantities produced, which worked with their goal to distill small batched whiskey. Things with the fire inspector also went well, he only needed to take a look around and tell them where to place their extinguishers. Lenny, with a sigh of relief thought, “Wow, I don’t think anyone’s had an easier road to opening a distillery!” And then things got interesting. “The fire inspector came back and made a comment in regards to barrel storage about how ‘it won’t be a problem because nothing’s over 12 percent alcohol.’” Lenny had to clarify because he didn’t think he heard him right. “Did you say 12 percent? Because whiskey is a little higher than that.” The fire inspector responded “Whiskey?! I thought this was a brewery!” From there everything got much more complicated. Lenny recollects a lot of fighting, yelling, and a lot of