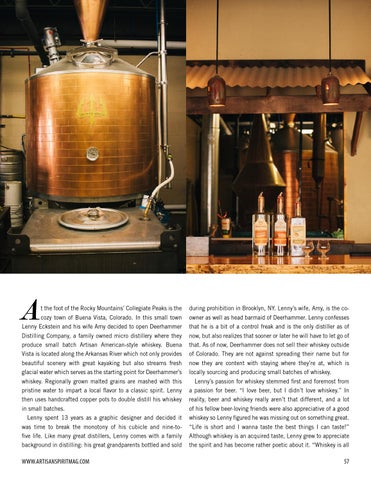 t the foot of the Rocky Mountains’ Collegiate Peaks is the

during prohibition in Brooklyn, NY. Lenny’s wife, Amy, is the co-

cozy town of Buena Vista, Colorado. In this small town

owner as well as head barmaid of Deerhammer. Lenny confesses

Lenny Eckstein and his wife Amy decided to open Deerhammer

Distilling Company, a family owned micro distillery where they

now, but also realizes that sooner or later he will have to let go of

that. As of now, Deerhammer does not sell their whiskey outside

Vista is located along the Arkansas River which not only provides

of Colorado. They are not against spreading their name but for

now they are content with staying where they’re at, which is

glacial water which serves as the starting point for Deerhammer’s

whiskey. Regionally grown malted grains are mashed with this

Lenny’s passion for whiskey stemmed first and foremost from

pristine water to impart a local flavor to a classic spirit. Lenny

a passion for beer. “I love beer, but I didn’t love whiskey.” In

then uses handcrafted copper pots to double distill his whiskey

reality, beer and whiskey really aren’t that different, and a lot

Lenny spent 13 years as a graphic designer and decided it

whiskey so Lenny figured he was missing out on something great.

“Life is short and I wanna taste the best things I can taste!”

five life. Like many great distillers, Lenny comes with a family

Although whiskey is an acquired taste, Lenny grew to appreciate

background in distilling: his great grandparents bottled and sold

the spirit and has become rather poetic about it. “Whiskey is all