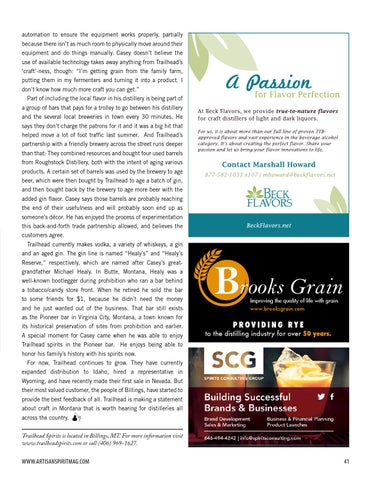 automation to ensure the equipment works properly, partially because there isn’t as much room to physically move around their equipment and do things manually. Casey doesn’t believe the use of available technology takes away anything from Trailhead’s ‘craft’-ness, though: “I’m getting grain from the family farm, putting them in my fermenters and turning it into a product. I don’t know how much more craft you can get.” Part of including the local flavor in his distillery is being part of a group of bars that pays for a trolley to go between his distillery and the several local breweries in town every 30 minutes. He says they don’t charge the patrons for it and it was a big hit that helped move a lot of foot traffic last summer. And Trailhead’s partnership with a friendly brewery across the street runs deeper than that: They combined resources and bought four used barrels from Roughstock Distillery, both with the intent of aging various products. A certain set of barrels was used by the brewery to age beer, which were then bought by Trailhead to age a batch of gin, and then bought back by the brewery to age more beer with the added gin flavor. Casey says those barrels are probably reaching the end of their usefulness and will probably soon end up as someone’s décor. He has enjoyed the process of experimentation this back-and-forth trade partnership allowed, and believes the customers agree. Trailhead currently makes vodka, a variety of whiskeys, a gin and an aged gin. The gin line is named “Healy’s” and “Healy’s Reserve,” respectively, which are named after Casey’s greatgrandfather Michael Healy. In Butte, Montana, Healy was a well-known bootlegger during prohibition who ran a bar behind a tobacco/candy store front. When he retired he sold the bar to some friends for $1, because he didn’t need the money and he just wanted out of the business. That bar still exists as the Pioneer bar in Virginia City, Montana, a town known for its historical preservation of sites from prohibition and earlier. A special moment for Casey came when he was able to enjoy

Brooks Grain Improving the quality of life with grain. www.brooksgrain.com

to the distilling industry for over 50 years.

Trailhead spirits in the Pioneer bar. He enjoys being able to honor his family’s history with his spirits now. For now, Trailhead continues to grow. They have currently expanded distribution to Idaho, hired a representative in Wyoming, and have recently made their first sale in Nevada. But their most valued customer, the people of Billings, have started to provide the best feedback of all. Trailhead is making a statement about craft in Montana that is worth hearing for distilleries all across the country.