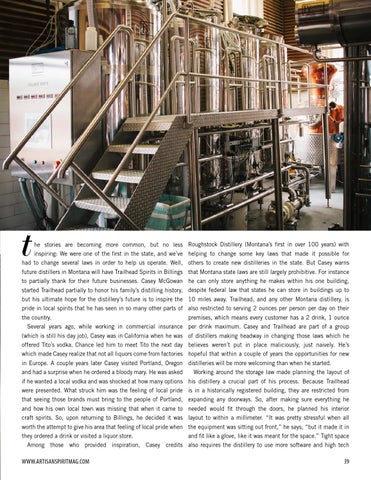 he stories are becoming more common, but no less Roughstock Distillery (Montana’s first in over 100 years) with inspiring: We were one of the first in the state, and we’ve helping to change some key laws that made it possible for

had to change several laws in order to help us operate. Well, others to create new distilleries in the state. But Casey warns future distillers in Montana will have Trailhead Spirits in Billings that Montana state laws are still largely prohibitive. For instance to partially thank for their future businesses. Casey McGowan he can only store anything he makes within his one building, started Trailhead partially to honor his family’s distilling history, despite federal law that states he can store in buildings up to but his ultimate hope for the distillery’s future is to inspire the 10 miles away. Trailhead, and any other Montana distillery, is pride in local spirits that he has seen in so many other parts of also restricted to serving 2 ounces per person per day on their the country.

premises, which means every customer has a 2 drink, 1 ounce

Several years ago, while working in commercial insurance per drink maximum. Casey and Trailhead are part of a group (which is still his day job), Casey was in California when he was of distillers making headway in changing those laws which he offered Tito’s vodka. Chance led him to meet Tito the next day believes weren’t put in place maliciously, just naively. He’s which made Casey realize that not all liquors come from factories hopeful that within a couple of years the opportunities for new in Europe. A couple years later Casey visited Portland, Oregon distilleries will be more welcoming than when he started. and had a surprise when he ordered a bloody mary. He was asked

Working around the storage law made planning the layout of

if he wanted a local vodka and was shocked at how many options his distillery a crucial part of his process. Because Trailhead were presented. What struck him was the feeling of local pride is in a historically registered building, they are restricted from that seeing those brands must bring to the people of Portland, expanding any doorways. So, after making sure everything he and how his own local town was missing that when it came to needed would fit through the doors, he planned his interior craft spirits. So, upon returning to Billings, he decided it was layout to within a millimeter. “It was pretty stressful when all worth the attempt to give his area that feeling of local pride when the equipment was sitting out front,” he says, “but it made it in they ordered a drink or visited a liquor store.

Among those who provided inspiration, Casey credits also requires the distillery to use more software and high tech