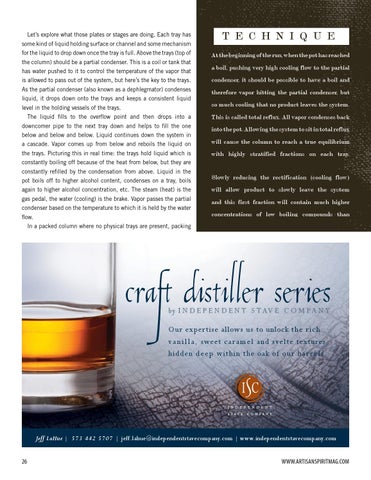 Let’s explore what those plates or stages are doing. Each tray has some kind of liquid holding surface or channel and some mechanism for the liquid to drop down once the tray is full. Above the trays (top of the column) should be a partial condenser. This is a coil or tank that has water pushed to it to control the temperature of the vapor that

T E C H N I Q U E At the beginning of the run, when the pot has reached a boil, pushing very high cooling flow to the partial

is allowed to pass out of the system, but here’s the key to the trays.

condenser, it should be possible to have a boil and

As the partial condenser (also known as a dephlegmator) condenses

liquid, it drops down onto the trays and keeps a consistent liquid level in the holding vessels of the trays. The liquid fills to the overflow point and then drops into a downcomer pipe to the next tray down and helps to fill the one below and below and below. Liquid continues down the system in

so much cooling that no product leaves the system. This is called total reflux. All vapor condenses back into the pot. Allowing the system to sit in total reflux

a cascade. Vapor comes up from below and reboils the liquid on

will cause the column to reach a true equilibrium

the trays. Picturing this in real time: the trays hold liquid which is

with highly stratified fractions on each tray.

constantly boiling off because of the heat from below, but they are constantly refilled by the condensation from above. Liquid in the pot boils off to higher alcohol content, condenses on a tray, boils again to higher alcohol concentration, etc. The steam (heat) is the gas pedal, the water (cooling) is the brake. Vapor passes the partial condenser based on the temperature to which it is held by the water flow.

In a packed column where no physical trays are present, packing

Dedicated to Our Customers’ Success Since 1912