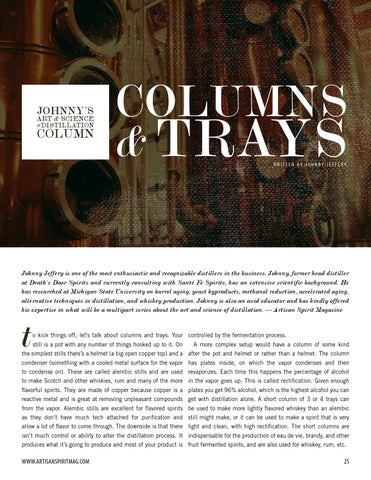 Johnny Jeffery is one of the most enthusiastic and recognizable distillers in the business. Johnny, former head distiller at Death’s Door Spirits and currently consulting with Santé Fe Spirits, has an extensive scientific background. He has researched at Michigan State University on barrel aging, yeast byproducts, methanol reduction, accelerated aging, alternative techniques in distillation, and whiskey production. Johnny is also an avid educator and has kindly offered his expertise in what will be a multipart series about the art and science of distillation. — Artisan Spirit Magazine

o kick things off, let’s talk about columns and trays. Your controlled by the fermentation process. still is a pot with any number of things hooked up to it. On

A more complex setup would have a column of some kind

the simplest stills there’s a helmet (a big open copper top) and a after the pot and helmet or rather than a helmet. The column condenser (something with a cooled metal surface for the vapor has plates inside, on which the vapor condenses and then to condense on). These are called alembic stills and are used revaporizes. Each time this happens the percentage of alcohol to make Scotch and other whiskies, rum and many of the more in the vapor goes up. This is called rectification. Given enough flavorful spirits. They are made of copper because copper is a plates you get 96% alcohol, which is the highest alcohol you can reactive metal and is great at removing unpleasant compounds get with distillation alone. A short column of 3 or 4 trays can from the vapor. Alembic stills are excellent for flavored spirits be used to make more lightly flavored whiskey than an alembic as they don’t have much tech attached for purification and still might make, or it can be used to make a spirit that is very allow a lot of flavor to come through. The downside is that there light and clean, with high rectification. The short columns are isn’t much control or ability to alter the distillation process. It indispensable for the production of eau de vie, brandy, and other produces what it’s going to produce and most of your product is fruit fermented spirits, and are also used for whiskey, rum, etc.