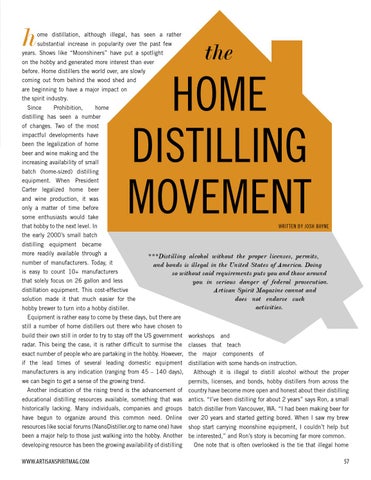 ome distillation, although illegal, has seen a rather

substantial increase in popularity over the past few

years. Shows like “Moonshiners” have put a spotlight on the hobby and generated more interest than ever

before. Home distillers the world over, are slowly coming out from behind the wood shed and are beginning to have a major impact on the spirit industry. Since

distilling has seen a number of changes. Two of the most impactful developments have been the legalization of home beer and wine making and the increasing availability of small batch (home-sized) distilling equipment. When President Carter legalized home beer and wine production, it was only a matter of time before some enthusiasts would take that hobby to the next level. In

the early 2000’s small batch distilling equipment became more readily available through a number of manufacturers. Today, it is easy to count 10+ manufacturers that solely focus on 26 gallon and less distillation equipment. This cost-effective solution made it that much easier for the hobby brewer to turn into a hobby distiller.

***Distilling alcohol without the proper licenses, permits, and bonds is illegal in the United States of America. Doing so without said requirements puts you and those around you in serious danger of federal prosecution. Artisan Spirit Magazine cannot and does not endorse such activities.

Equipment is rather easy to come by these days, but there are still a number of home distillers out there who have chosen to build their own still in order to try to stay off the US government

radar. This being the case, it is rather difficult to surmise the

exact number of people who are partaking in the hobby. However, the if the lead times of several leading domestic equipment manufacturers is any indication (ranging from 45 – 140 days), we can begin to get a sense of the growing trend.

distillation with some hands-on instruction. Although it is illegal to distill alcohol without the proper permits, licenses, and bonds, hobby distillers from across the

Another indication of the rising trend is the advancement of

country have become more open and honest about their distilling

educational distilling resources available, something that was

antics. “I’ve been distilling for about 2 years” says Ron, a small

batch distiller from Vancouver, WA. “I had been making beer for

have begun to organize around this common need. Online

over 20 years and started getting bored. When I saw my brew

resources like social forums (NanoDistiller.org to name one) have

been a major help to those just walking into the hobby. Another

be interested,” and Ron’s story is becoming far more common.

developing resource has been the growing availability of distilling