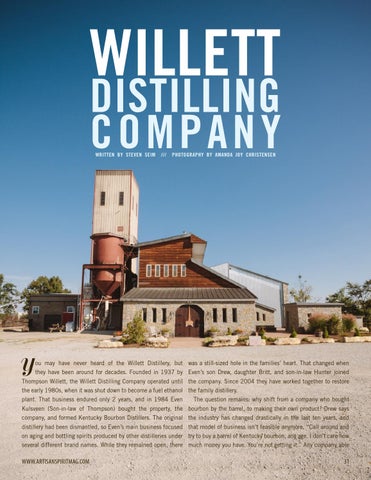 ou may have never heard of the Willett Distillery, but was a still-sized hole in the families’ heart. That changed when they have been around for decades. Founded in 1937 by Even’s son Drew, daughter Britt, and son-in-law Hunter joined

Thompson Willett, the Willett Distilling Company operated until the company. Since 2004 they have worked together to restore the early 1980s, when it was shut down to become a fuel ethanol the family distillery. plant. That business endured only 2 years, and in 1984 Even

The question remains: why shift from a company who bought

Kulsveen (Son-in-law of Thompson) bought the property, the bourbon by the barrel, to making their own product? Drew says company, and formed Kentucky Bourbon Distillers. The original the industry has changed drastically in the last ten years, and distillery had been dismantled, so Even’s main business focused that model of business isn’t feasible anymore. “Call around and on aging and bottling spirits produced by other distilleries under try to buy a barrel of Kentucky bourbon, any age. I don’t care how several different brand names. While they remained open, there much money you have. You’re not getting it.” Any company able