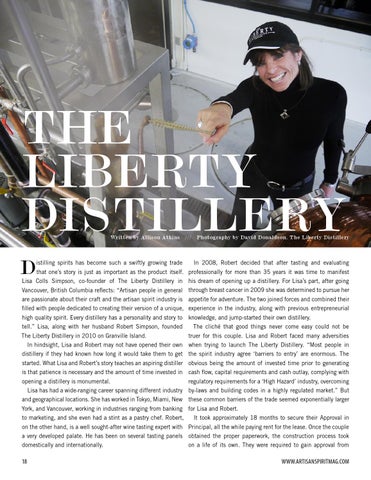 istilling spirits has become such a swiftly growing trade

In 2008, Robert decided that after tasting and evaluating

that one’s story is just as important as the product itself. professionally for more than 35 years it was time to manifest

Lisa Colls Simpson, co-founder of The Liberty Distillery in

his dream of opening up a distillery. For Lisa’s part, after going

through breast cancer in 2009 she was determined to pursue her

are passionate about their craft and the artisan spirit industry is

appetite for adventure. The two joined forces and combined their

filled with people dedicated to creating their version of a unique, experience in the industry, along with previous entrepreneurial high quality spirit. Every distillery has a personality and story to tell.” Lisa, along with her husband Robert Simpson, founded The Liberty Distillery in 2010 on Granville Island.

knowledge, and jump-started their own distillery. The cliché that good things never come easy could not be truer for this couple. Lisa and Robert faced many adversities

In hindsight, Lisa and Robert may not have opened their own

when trying to launch The Liberty Distillery. “Most people in

the spirit industry agree ‘barriers to entry’ are enormous. The

started. What Lisa and Robert’s story teaches an aspiring distiller obvious being the amount of invested time prior to generating is that patience is necessary and the amount of time invested in opening a distillery is monumental.

Lisa has had a wide-ranging career spanning different industry

by-laws and building codes in a highly regulated market.” But

and geographical locations. She has worked in Tokyo, Miami, New

these common barriers of the trade seemed exponentially larger

York, and Vancouver, working in industries ranging from banking

for Lisa and Robert.

to marketing, and she even had a stint as a pastry chef. Robert,

It took approximately 18 months to secure their Approval in

on the other hand, is a well sought-after wine tasting expert with

Principal, all the while paying rent for the lease. Once the couple

a very developed palate. He has been on several tasting panels

on a life of its own. They were required to gain approval from