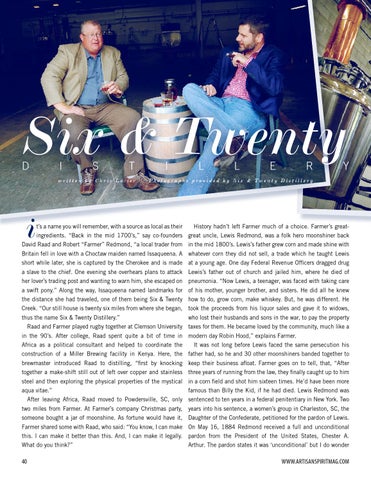 t’s a name you will remember, with a source as local as their

History hadn’t left Farmer much of a choice. Farmer’s great-

ingredients. “Back in the mid 1700’s,” say co-founders great uncle, Lewis Redmond, was a folk hero moonshiner back

David Raad and Robert “Farmer” Redmond, “a local trader from in the mid 1800’s. Lewis’s father grew corn and made shine with Britain fell in love with a Choctaw maiden named Issaqueena. A

whatever corn they did not sell, a trade which he taught Lewis

short while later, she is captured by the Cherokee and is made at a young age. One day Federal Revenue Officers dragged drug a slave to the chief. One evening she overhears plans to attack Lewis’s father out of church and jailed him, where he died of her lover’s trading post and wanting to warn him, she escaped on

pneumonia. “Now Lewis, a teenager, was faced with taking care

a swift pony.” Along the way, Issaqueena named landmarks for

of his mother, younger brother, and sisters. He did all he knew

the distance she had traveled, one of them being Six &amp; Twenty how to do, grow corn, make whiskey. But, he was different. He Creek. “Our still house is twenty six miles from where she began,

took the proceeds from his liquor sales and gave it to widows,

who lost their husbands and sons in the war, to pay the property

Raad and Farmer played rugby together at Clemson University in the 90’s. After college, Raad spent quite a bit of time in

taxes for them. He became loved by the community, much like a modern day Robin Hood,” explains Farmer.

Africa as a political consultant and helped to coordinate the

It was not long before Lewis faced the same persecution his

construction of a Miller Brewing facility in Kenya. Here, the

father had, so he and 30 other moonshiners banded together to

keep their business afloat. Farmer goes on to tell, that, “After

three years of running from the law, they finally caught up to him

steel and then exploring the physical properties of the mystical in a corn field and shot him sixteen times. He’d have been more aqua vitae.”

famous than Billy the Kid, if he had died. Lewis Redmond was

After leaving Africa, Raad moved to Powdersville, SC, only

sentenced to ten years in a federal penitentiary in New York. Two

years into his sentence, a women’s group in Charleston, SC, the

someone bought a jar of moonshine. As fortune would have it,

Daughter of the Confederate, petitioned for the pardon of Lewis.

Farmer shared some with Raad, who said: “You know, I can make

On May 16, 1884 Redmond received a full and unconditional

this. I can make it better than this. And, I can make it legally. pardon from the President of the United States, Chester A. What do you think?”

Arthur. The pardon states it was ‘unconditional’ but I do wonder