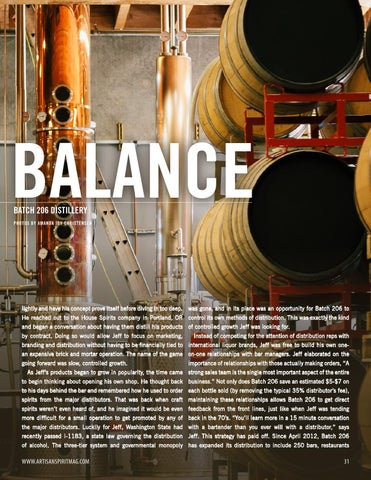 lightly and have his concept prove itself before diving in too deep. was gone, and in its place was an opportunity for Batch 206 to He reached out to the House Spirits company in Portland, OR control its own methods of distribution. This was exactly the kind and began a conversation about having them distill his products of controlled growth Jeff was looking for. by contract. Doing so would allow Jeff to focus on marketing,

Instead of competing for the attention of distribution reps with

branding and distribution without having to be financially tied to international liquor brands, Jeff was free to build his own onean expensive brick and mortar operation. The name of the game on-one relationships with bar managers. Jeff elaborated on the going forward was slow, controlled growth.

importance of relationships with those actually making orders, “A

As Jeff’s products began to grow in popularity, the time came strong sales team is the single most important aspect of the entire to begin thinking about opening his own shop. He thought back business.” Not only does Batch 206 save an estimated $5-$7 on to his days behind the bar and remembered how he used to order each bottle sold (by removing the typical 35% distributor’s fee), spirits from the major distributors. That was back when craft maintaining these relationships allows Batch 206 to get direct spirits weren’t even heard of, and he imagined it would be even feedback from the front lines, just like when Jeff was tending more difficult for a small operation to get promoted by any of back in the 70’s. “You’ll learn more in a 15 minute conversation the major distributors. Luckily for Jeff, Washington State had with a bartender than you ever will with a distributor,” says recently passed I-1183, a state law governing the distribution Jeff. This strategy has paid off. Since April 2012, Batch 206 of alcohol. The three-tier system and governmental monopoly has expanded its distribution to include 250 bars, restaurants