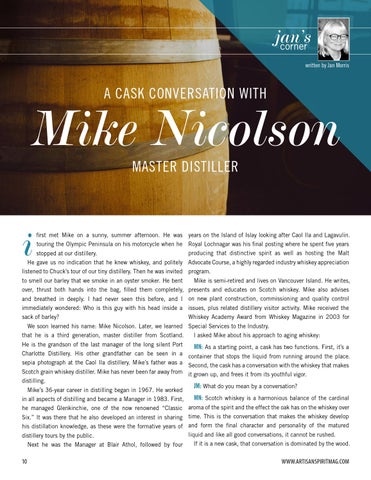 A CASK CONVERSATION WITH

first met Mike on a sunny, summer afternoon. He was

years on the Island of Islay looking after Caol Ila and Lagavulin.

touring the Olympic Peninsula on his motorcycle when he

Royal Lochnagar was his final posting where he spent five years

stopped at our distillery.

producing that distinctive spirit as well as hosting the Malt

He gave us no indication that he knew whiskey, and politely Advocate Course, a highly regarded industry whiskey appreciation

listened to Chuck’s tour of our tiny distillery. Then he was invited to smell our barley that we smoke in an oyster smoker. He bent

program. Mike is semi-retired and lives on Vancouver Island. He writes,

over, thrust both hands into the bag, filled them completely, presents and educates on Scotch whiskey. Mike also advises and breathed in deeply. I had never seen this before, and I on new plant construction, commissioning and quality control immediately wondered: Who is this guy with his head inside a

Whiskey Academy Award from Whiskey Magazine in 2003 for

We soon learned his name: Mike Nicolson. Later, we learned that he is a third generation, master distiller from Scotland. He is the grandson of the last manager of the long silent Port Charlotte Distillery. His other grandfather can be seen in a sepia photograph at the Caol Ila distillery. Mike’s father was a Scotch grain whiskey distiller. Mike has never been far away from distilling. Mike’s 36-year career in distilling began in 1967. He worked

Special Services to the Industry. I asked Mike about his approach to aging whiskey:

MN: As a starting point, a cask has two functions. First, it’s a container that stops the liquid from running around the place. Second, the cask has a conversation with the whiskey that makes it grown up, and frees it from its youthful vigor.

JM: What do you mean by a conversation?

in all aspects of distilling and became a Manager in 1983. First,

MN: Scotch whiskey is a harmonious balance of the cardinal

he managed Glenkinchie, one of the now renowned “Classic

Six.” It was there that he also developed an interest in sharing

time. This is the conversation that makes the whiskey develop

his distillation knowledge, as these were the formative years of and form the final character and personality of the matured liquid and like all good conversations, it cannot be rushed. distillery tours by the public. Next he was the Manager at Blair Athol, followed by four

If it is a new cask, that conversation is dominated by the wood.