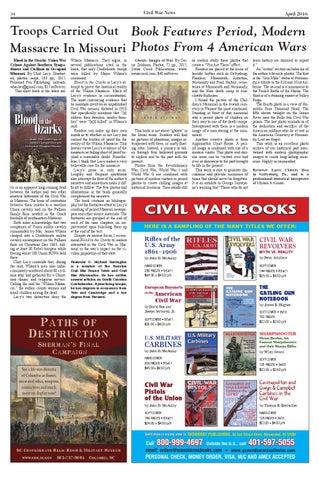 vo in an apparent long-running feud between the author and two other amateur historians of the Civil War in Missouri. The bone of contention between them relates to a wartime Union cavalry raid on the Pulliam family farm nestled in the Ozark foothills of southeastern Missouri. Both sides acknowledge that two companies of Union militia cavalry commanded by Maj. James Wilson charged into a Confederate militia cavalry encampment on the Pulliam farm on Christmas Day 1863, killing at least 30 Rebel troopers while freeing about 100 Union POWs held there. Clint Lacy contends that, during the raid, Wilson’s men also indiscriminately murdered about 60 civilians who had gathered for a Christmas dinner and religious service. Calling the raid the “Wilson Massacre,” the author counts women and small children among the dead. Lacy’s two detractors deny the

Wilson Massacre. They argue, in several publications cited in the book, that only Confederate troops were killed by Major Wilson’s command. Blood in the Ozarks is Lacy’s attempt to prove the historical reality of the Wilson Massacre. Much of Lacy’s evidence is circumstantial. The most convincing evidence that he marshals involves an unpublished Civil War memoir dictated in 1918 that specifically mentions that “[s] oldiers, their families, nearby families” were “[a]ll killed” in Wilson’s raid. Readers can make up their own minds as to whether or not Lacy has carried the burden of proof for the reality of the Wilson Massacre. This lawyer views Lacy’s evidence of the massacre as falling short of proof beyond a reasonable doubt. Nonetheless, I think that Lacy makes a very believable case for the massacre. Lacy’s prose is only so-so. Lengthy and frequent quotations also interrupt the flow of the author’s narrative and sometimes make it difficult to follow. The few photos and illustrations in the book generally complement the narrative. The book contains no bibliography, but the footnotes attest to Lacy’s combing of period Missouri newspapers and other source materials. The footnotes are grouped at the end of each of the nine chapters, an improvement upon bunching them up at the end of the text. Despite its narrow focus, I recommend Blood in the Ozarks to readers interested in the Civil War in Missouri or the war’s impact on the civilian population of that state. Reviewer C. Michael Harrington is a member of the Houston Civil War Round Table and Civil War Aficionados. He has written several articles on South Carolina Confederates. A practicing lawyer, he has degrees in economics from Yale and Cambridge and a law degree from Harvard.

This book is not about “ghosts” in the literal sense. Readers will find no pictures of phantoms, images interspersed with trees, or misty floating orbs. Instead, a journey is taken through four hallowed grounds to explore and tie the past with the present. Photos from the Revolutionary War, Civil War, World War I and World War II are combined with pictures of modern visitors or period photos to create chilling images at historical locations. Time stands still

as readers study these photos that create a “You Are There” effect. Readers are placed at the scene of horrific battles such as Gettysburg, Flanders, Monmouth, Antietam, Normandy and Pearl Harbor; cemeteries at Monmouth and Normandy; and the Nazi death camp at Auschwitz-Birkenau. I found the picture of the Children’s Memorial in the Jewish cemetery in Warsaw the most emotional. Standing in front of this memorial was a period photo of children on their way to one of the death camps. Interspersed with them is a modern image of a man staring at the monument. Another creative photo is from Appomattox Court House. A period image is combined with one of a modern visitor. This photo and dozens more can be viewed over and over as doorways to the past brought to life in the present. This work is sure to generate discussions and provide memories of times that should never be forgotten. It is an antidote to George Santayana’s warning that “Those who do not

See a life-size diorama of Columbia in flames, excavated relics, weapons, interactives and much more on display now!

CIVIL WAR BOOKS HERE IS A SAMPLING OF THE MANY TITLES WE OFFER:

European Bayonets of the

learn history are doomed to repeat it.” An “extras” section includes six of the author’s favorite photos. The first is the “Iron Mike” statue at Normandy, a tribute to the 82d and 101st Airborne. The second is a monument to the French Battle of the Marne. The third is of a stunning sunset at Valley Forge. The fourth photo is a view of Honolulu from Diamond Head. The fifth shows twilight on the James River near the Belle Isle Civil War prison. The last photo reminds us of the dedication and sacrifice of the American soldiers who lie at rest in the American Cemetery at Normandy. Lest we forget. This work is an excellent photo archive of our historical past intertwined with modern photographic images to create long-lasting memories. Highly recommended.

Hiram Berdan, his Famous Sharpshooters and their Sharps Rifles

Civil War Pistols of the Union

Cosmopolitan and Gwyn &amp; Campbell Carbines in the Civil War

by Thomas B. Rentschler

This is the April 2016 edition of Civil War News. 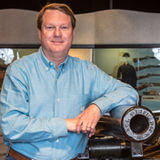