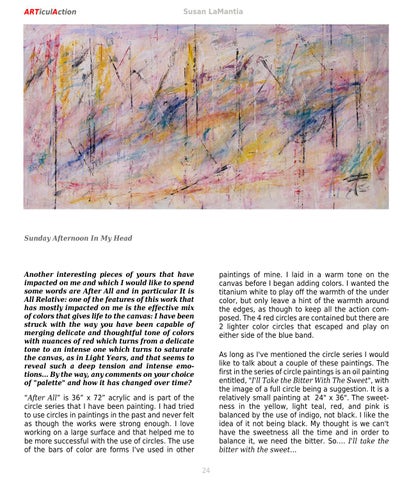 Sunday Afternoon In My Head

Another interesting pieces of yours that have impacted on me and which I would like to spend some words are After All and in particular It is All Relative: one of the features of this work that has mostly impacted on me is the effective mix of colors that gives life to the canvas: I have been struck with the way you have been capable of merging delicate and thoughtful tone of colors with nuances of red which turns from a delicate tone to an intense one which turns to saturate the canvas, as in Light Years, and that seems to reveal such a deep tension and intense emotions... By the way, any comments on your choice of "palette" and how it has changed over time?

paintings of mine. I laid in a warm tone on the canvas before I began adding colors. I wanted the titanium white to play off the warmth of the under color, but only leave a hint of the warmth around the edges, as though to keep all the action composed. The 4 red circles are contained but there are 2 lighter color circles that escaped and play on either side of the blue band. As long as I've mentioned the circle series I would like to talk about a couple of these paintings. The first in the series of circle paintings is an oil painting entitled, "I'll Take the Bitter With The Sweet", with the image of a full circle being a suggestion. It is a relatively small painting at 24" x 36". The sweetness in the yellow, light teal, red, and pink is balanced by the use of indigo, not black. I like the idea of it not being black. My thought is we can't have the sweetness all the time and in order to balance it, we need the bitter. So.… I'll take the Sims bitter withJennifer the sweet…

“After All” is 36” x 72” acrylic and is part of the circle series that I have been painting. I had tried to use circles in paintings in the past and never felt as though the works were strong enough. I love working on a large surface and that helped me to be more successful with the use of circles. The use of the bars of color are forms I've used in other 24 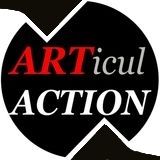