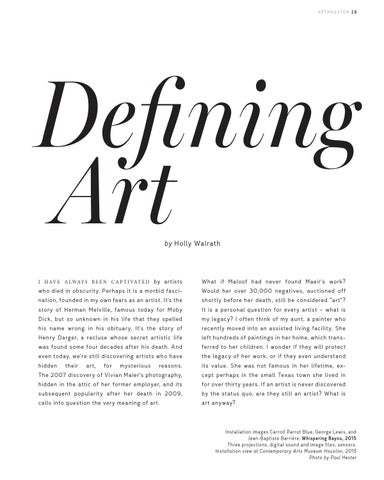 I H A V E A L WA Y S B E E N C A P T I VA T E D by artists who died in obscurity. Perhaps it is a morbid fascination, founded in my own fears as an artist. It’s the story of Herman Melville, famous today for Moby Dick, but so unknown in his life that they spelled his name wrong in his obituary. It’s the story of Henry Darger, a recluse whose secret artistic life was found some four decades after his death. And even today, we’re still discovering artists who have hidden their art, for mysterious reasons. The 2007 discovery of Vivian Maier’s photography, hidden in the attic of her former employer, and its subsequent popularity after her death in 2009, calls into question the very meaning of art.

What if Maloof had never found Maeir’s work? Would her over 30,000 negatives, auctioned off shortly before her death, still be considered “art”? It is a personal question for every artist – what is my legacy? I often think of my aunt, a painter who recently moved into an assisted living facility. She left hundreds of paintings in her home, which transferred to her children. I wonder if they will protect the legacy of her work, or if they even understand its value. She was not famous in her lifetime, except perhaps in the small Texas town she lived in for over thirty years. If an artist is never discovered by the status quo, are they still an artist? What is art anyway? 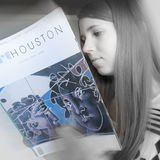