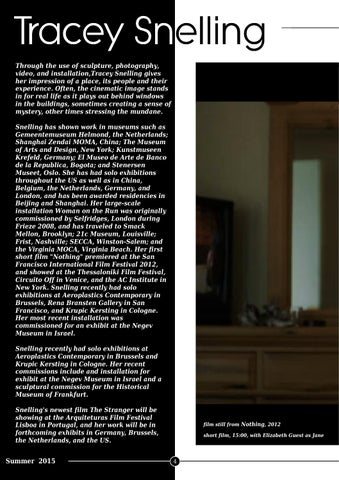 Tracey Snelling Snelling Through the use of sculpture, photography, video, and installation,Tracey Snelling gives her impression of a place, its people and their experience. Often, the cinematic image stands in for real life as it plays out behind windows in the buildings, sometimes creating a sense of mystery, other times stressing the mundane. Snelling has shown work in museums such as Gemeentemuseum Helmond, the Netherlands; Shanghai Zendai MOMA, China; The Museum of Arts and Design, New York; Kunstmuseen Krefeld, Germany; El Museo de Arte de Banco de la Republica, Bogota; and Stenersen Museet, Oslo. She has had solo exhibitions throughout the US as well as in China, Belgium, the Netherlands, Germany, and London, and has been awarded residencies in Beijing and Shanghai. Her large-scale installation Woman on the Run was originally commissioned by Selfridges, London during Frieze 2008, and has traveled to Smack Mellon, Brooklyn; 21c Museum, Louisville; Frist, Nashville; SECCA, Winston-Salem; and the Virginia MOCA, Virginia Beach. Her first short film &quot;Nothing&quot; premiered at the San Francisco International Film Festival 2012, and showed at the Thessaloniki Film Festival, Circuito Off in Venice, and the AC Institute in New York. Snelling recently had solo exhibitions at Aeroplastics Contemporary in Brussels, Rena Bransten Gallery in San Francisco, and Krupic Kersting in Cologne. Her most recent installation was commissioned for an exhibit at the Negev Museum in Israel. Snelling recently had solo exhibitions at Aeroplastics Contemporary in Brussels and Krupic Kersting in Cologne. Her recent commissions include and installation for exhibit at the Negev Museum in Israel and a sculptural commission for the Historical Museum of Frankfurt. Snelling&#39;s newest film The Stranger will be showing at the Arquiteturas Film Festival Lisboa in Portugal, and her work will be in forthcoming exhibits in Germany, Brussels, the Netherlands, and the US. 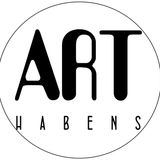