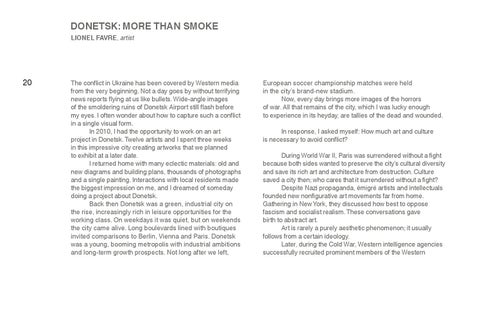 The conflict in Ukraine has been covered by Western media from the very beginning. Not a day goes by without terrifying news reports flying at us like bullets. Wide-angle images of the smoldering ruins of Donetsk Airport still flash before my eyes. I often wonder about how to capture such a conflict in a single visual form. In 2010, I had the opportunity to work on an art project in Donetsk. Twelve artists and I spent three weeks in this impressive city creating artworks that we planned to exhibit at a later date. I returned home with many eclectic materials: old and new diagrams and building plans, thousands of photographs and a single painting. Interactions with local residents made the biggest impression on me, and I dreamed of someday doing a project about Donetsk. Back then Donetsk was a green, industrial city on the rise, increasingly rich in leisure opportunities for the working class. On weekdays it was quiet, but on weekends the city came alive. Long boulevards lined with boutiques invited comparisons to Berlin, Vienna and Paris. Donetsk was a young, booming metropolis with industrial ambitions and long-term growth prospects. Not long after we left,

European soccer championship matches were held in the city’s brand-new stadium. Now, every day brings more images of the horrors of war. All that remains of the city, which I was lucky enough to experience in its heyday, are tallies of the dead and wounded. In response, I asked myself: How much art and culture is necessary to avoid conflict? During World War II, Paris was surrendered without a fight because both sides wanted to preserve the city’s cultural diversity and save its rich art and architecture from destruction. Culture saved a city then; who cares that it surrendered without a fight? Despite Nazi propaganda, émigré artists and intellectuals founded new nonfigurative art movements far from home. Gathering in New York, they discussed how best to oppose fascism and socialist realism. These conversations gave birth to abstract art. Art is rarely a purely aesthetic phenomenon; it usually follows from a certain ideology. Later, during the Cold War, Western intelligence agencies successfully recruited prominent members of the Western 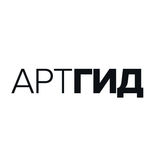