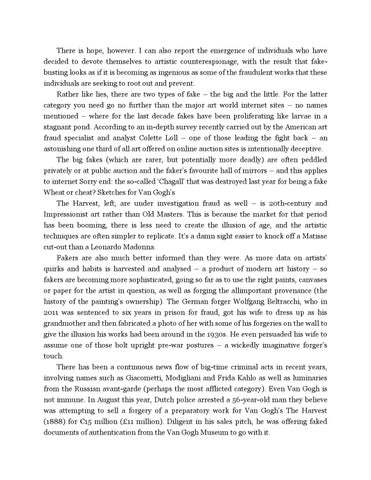 There is hope, however. I can also report the emergence of individuals who have decided to devote themselves to artistic counterespionage, with the result that fakebusting looks as if it is becoming as ingenious as some of the fraudulent works that these individuals are seeking to root out and prevent. Rather like lies, there are two types of fake – the big and the little. For the latter category you need go no further than the major art world internet sites – no names mentioned – where for the last decade fakes have been proliferating like larvae in a stagnant pond. According to an in-depth survey recently carried out by the American art fraud specialist and analyst Colette Loll – one of those leading the fight back – an astonishing one third of all art offered on online auction sites is intentionally deceptive. The big fakes (which are rarer, but potentially more deadly) are often peddled privately or at public auction and the faker’s favourite hall of mirrors – and this applies to internet Sorry end: the so-called ‘Chagall’ that was destroyed last year for being a fake Wheat or cheat? Sketches for Van Gogh’s The Harvest, left, are under investigation fraud as well – is 20th-century and Impressionist art rather than Old Masters. This is because the market for that period has been booming, there is less need to create the illusion of age, and the artistic techniques are often simpler to replicate. It’s a damn sight easier to knock off a Matisse cut-out than a Leonardo Madonna. Fakers are also much better informed than they were. As more data on artists’ quirks and habits is harvested and analysed – a product of modern art history – so fakers are becoming more sophisticated, going so far as to use the right paints, canvases or paper for the artist in question, as well as forging the allimportant provenance (the history of the painting’s ownership). The German forger Wolfgang Beltracchi, who in 2011 was sentenced to six years in prison for fraud, got his wife to dress up as his grandmother and then fabricated a photo of her with some of his forgeries on the wall to give the illusion his works had been around in the 1930s. He even persuaded his wife to assume one of those bolt upright pre-war postures – a wickedly imaginative forger’s touch. There has been a continuous news flow of big-time criminal acts in recent years, involving names such as Giacometti, Modigliani and Frida Kahlo as well as luminaries from the Russian avant-garde (perhaps the most afflicted category). Even Van Gogh is not immune. In August this year, Dutch police arrested a 56-year-old man they believe was attempting to sell a forgery of a preparatory work for Van Gogh’s The Harvest (1888) for €15 million (£11 million). Diligent in his sales pitch, he was offering faked documents of authentication from the Van Gogh Museum to go with it. As new research suggests that up to a third of artworks sold online may be forgeries, the art world is turning to increasingly ingenious met...

As new research suggests that up to a third of artworks sold online may be forgeries, the art world is turning to increasingly ingenious met...