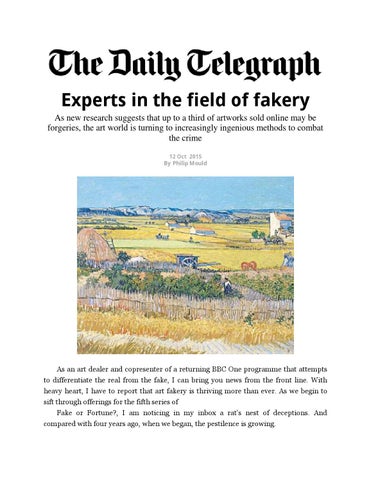 Experts in the field of fakery As new research suggests that up to a third of artworks sold online may be forgeries, the art world is turning to increasingly ingenious methods to combat the crime 12 Oct 2015 By Philip Mould

As an art dealer and copresenter of a returning BBC One programme that attempts to differentiate the real from the fake, I can bring you news from the front line. With heavy heart, I have to report that art fakery is thriving more than ever. As we begin to sift through offerings for the fifth series of Fake or Fortune?, I am noticing in my inbox a ratâ&amp;#x20AC;&amp;#x2122;s nest of deceptions. And compared with four years ago, when we began, the pestilence is growing.

There is hope, however. I can also report the emergence of individuals who have decided to devote themselves to artistic counterespionage, with the result that fakebusting looks as if it is becoming as ingenious as some of the fraudulent works that these individuals are seeking to root out and prevent. Rather like lies, there are two types of fake – the big and the little. For the latter category you need go no further than the major art world internet sites – no names mentioned – where for the last decade fakes have been proliferating like larvae in a stagnant pond. According to an in-depth survey recently carried out by the American art fraud specialist and analyst Colette Loll – one of those leading the fight back – an astonishing one third of all art offered on online auction sites is intentionally deceptive. The big fakes (which are rarer, but potentially more deadly) are often peddled privately or at public auction and the faker’s favourite hall of mirrors – and this applies to internet Sorry end: the so-called ‘Chagall’ that was destroyed last year for being a fake Wheat or cheat? Sketches for Van Gogh’s The Harvest, left, are under investigation fraud as well – is 20th-century and Impressionist art rather than Old Masters. This is because the market for that period has been booming, there is less need to create the illusion of age, and the artistic techniques are often simpler to replicate. It’s a damn sight easier to knock off a Matisse cut-out than a Leonardo Madonna. Fakers are also much better informed than they were. As more data on artists’ quirks and habits is harvested and analysed – a product of modern art history – so fakers are becoming more sophisticated, going so far as to use the right paints, canvases or paper for the artist in question, as well as forging the allimportant provenance (the history of the painting’s ownership). The German forger Wolfgang Beltracchi, who in 2011 was sentenced to six years in prison for fraud, got his wife to dress up as his grandmother and then fabricated a photo of her with some of his forgeries on the wall to give the illusion his works had been around in the 1930s. He even persuaded his wife to assume one of those bolt upright pre-war postures – a wickedly imaginative forger’s touch. There has been a continuous news flow of big-time criminal acts in recent years, involving names such as Giacometti, Modigliani and Frida Kahlo as well as luminaries from the Russian avant-garde (perhaps the most afflicted category). Even Van Gogh is not immune. In August this year, Dutch police arrested a 56-year-old man they believe was attempting to sell a forgery of a preparatory work for Van Gogh’s The Harvest (1888) for €15 million (£11 million). Diligent in his sales pitch, he was offering faked documents of authentication from the Van Gogh Museum to go with it.

But all is not lost; it seems our allies the Americans are beginning to lead a counterattack. Fighting fire with fire, as they describe it, the State University of New York at Albany has developed a “standards-based technology” for codifying all important works of art in the future. The particularly interesting part is it has incubated the development of a synthetic DNA that can be invisibly embedded into many types of art. Using a scan, this DNA can then reveal the true authorship of pieces for future generations. Only time will tell if this hi-tech method will work, but prestigious technical and scientific establishments have been involved with the project as well as major art institutions, and big-name artists such as Chuck Close and Eric Fischl have signed up. “This is a fundamentally new approach for permanently and safely marking and identifying artworks,” says Lawrence M Shindell, a spokesman for the project and chairman of ARIS Title Insurance Corporation, which has supported the initiative. “It combines a unique form of DNA-embedding and other standards-based technologies to enable everyone in the art industry – from dealer to investor, artist to curator – to have certainty about the authentic nature of artworks and provenance information.” There is also an interesting approach from Art Fraud Insights, a troubleshooting company for potential fakes, run by Colette Loll. It is working on an algorithm to spot the listing of present-day fakes on what Loll calls a “major online auction site”. Loll is an expert in the authentic sense. A victim of deception herself (she will not be drawn on details), five years ago, with the support of an FBI agent brother, she morphed from a corporate investigator into an artistic one. She describes a “passion for truth” as her primary motivation, and art world jiggery-pokery has become her forte. Given the undercover nature of her work she cannot give her client’s name, but I have my suspicions. Loll has created a model for automating fake-busting. One of the areas she has been addressing is the cottage industry in bogus expertise – unrecognised individuals who “authenticate” a fake picture, but whose word is worth less than the often tacky frame the picture comes in. This worthless reassurance, upon which the algorithm will swoop, often takes the form of pseudo-official bunkum: Certificate of Registration, Certificate of Autograph or, best of all, Certificate of Realness. Wholesome words such as “original”, “genuine”, “vintage” and “authentic” have also been requisitioned and mangled by fake sellers, who want to avoid actionable claims by potential purchasers. Loll showed me a weasel-worded auction description for a crayon on paper drawing that was being vaunted as either a work by Matisse or one of his models. It was headlined, “Original Crayon on Paper Drawing Henri Matisse Vintage”

and listed at $999.99. I would give Ray-Bans from a Covent Garden street seller a higher chance of being authentic. The idea is that repeat offenders will be banned from the auction site, but Loll admits that is not the complete solution. “Unfortunately, they resurface on an alternative site or under another name. It’s a bit like that game Whack a Mole: we hit them, but they just pop up in another place.” At least the art world is not taking this unholy onslaught lying down. The arms race systematically to beat the faker has begun, and – provided it matches the evolving sophistication of the perpetrators – it is better than outraged inertia. I am biding my time until the introduction of a new response from the artistically uncommitted: “I don’t know much about art, but I like the DNA.”

As new research suggests that up to a third of artworks sold online may be forgeries, the art world is turning to increasingly ingenious methods to combat crime