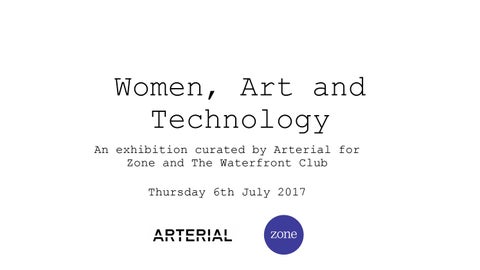 Women, Art and Technology An exhibition curated by Arterial for Zone and The Waterfront Club Thursday 6th July 2017

The Event Arterial is an agency dedicated to making workplace art a positive force for change. It uses business knowledge, connections and art expertise to create opportunities and arts projects that bring a fresh incentive to people and companies. Arterial sets out to encourage more people to connect with art. Arterial stands for inclusion and participation, not exclusion or intimidation. Zone is one of the UKâ&amp;#x20AC;&amp;#x2122;s leading independent digital agencies, helping ambitious businesses win in a world where digital is mission critical. Zone has asked Arterial to organise an event for the womenâ&amp;#x20AC;&amp;#x2122;s network The Waterfront Club themed around female artists working with technology and digital material. The theme is deliberately broad to accommodate a showcase for artists working across and inspired by a variety of technologies, digital and post digital visual art, printing, textiles and 3-D sculpture.

Carla Gannis Carla Gannis updates Hieronymus Bosch’s famous triptych in her Garden of Emoji Delights replacing medieval religious symbolism with an emoji-inspired iconography of the 21st century. First and foremost, Carla is a storyteller, rooted in Southern Gothic which she expands into “Internet Gothic,” where she has re-focused her narratives through 21st Century representational technologies. With digital collage and remix she reveals the hybrid nature of identity, where virtual and real embodiments of self diverge and intersect.

Emily Lazerwitz is an artist and mathematician born in 1991 in Washington D.C. (USA). She studied at Slade School of Fine Art, UCL, London and Columbia University, New York. For Lazerwitz a myth is defined as a complex widely believed story that is inherently false yet explains phenomena that are inexplicable in nature. Her work tries to untangle this paradox by looking into structures that use a mythological system of logic to function. It also strives to input a feminist narrative into the technological methods of creation.

Gretta Louw was born in South Africa but grew up in Australia; she received her BA in 2001 from the University of Western Australia and Honours in Psychology in 2002, subsequently living in Japan and New Zealand before moving to Germany in 2007. In recent years she has participated in residencies in Australia, Israel, and the US, and her work has been exhibited widely - in New York, Berlin, London, Jakarta, and Tel Aviv, amongst others including in a number of public institutions such as the Kunstmuseum Solothurn, Stadtgalerie Mannheim, and Kunstverein Ludwigshafen. Her writing has been featured on platforms such as Hyperallergic, Furtherfield, and DigiCult, and in numerous print publications and catalogues. In 2012, she released her first book, Controlling Connectivity: Art, Psychology, and the Internet (a limited edition artist&#39;s book about her durational online performance of the same name), followed in 2013 by Warnayaka Art Centre: Art in the Digital Desert, and in 2014 her first catalogue Works / Arbeiten 2011-2014. She lives and works in Germany and Australia.

Caro Halford Caro is a multi-disciplinary artist, with a studio at ASC Studios, Kingston. She gives you the opportunity to listen to her personal experiences through the use of sound recreated through an object or in a space specifically designed for the use of audio. &#39;A Day in the Life of a 1950&#39;s Housewife&#39; asks &quot;would you like a cup of tea and is everything okay?“ Through performance and sound, Caro places you in the home and tells a story of women’s lives, today and in the past.

Annie Abrahams Annie Abrahams has a doctoral (M2) in biology from the University of Utrecht and a MA from the Academy of Fine Arts of Arnhem. In her work, using video and performance as well as the internet, she questions the possibilities and the limits of communication in general and more specifically investigates its modes under networked conditions. She is known worldwide for her net art and collective writing experiments and is an internationally regarded pioneer of networked performance art. Abrahams develops what she calls an aesthetic of trust and attention and creates situations meant to reveal messy and sloppy sides of human behaviour, where she traps reality and makes that reality available for analysis.

Martha is a London based research practitioner. Her work draws on her background in research, design and making to explore, understand and reveal new practices of preservation and how these might be affecting the ways that we relate to the world. Her research is currently focused on the use of digital archiving to store historical artefacts. Increasingly, it is becoming commonplace to keep a 3D virtual version of a museum artefact that can be printed at any scale, at any place in the world by anyone. This is beginning to have an effect on the way that we see heritage objects as unique and precious objects. She works within the technology itself, using its form, techniques and processes to expose its realities and understand what it means.

Arterial would like to thank Furtherfield and Articurate for their cooperation.