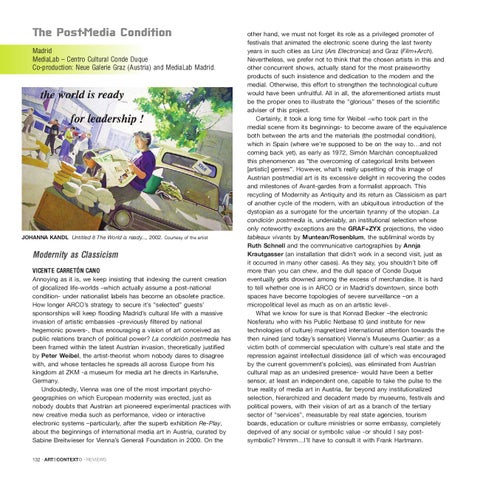 JOHANNA KANDL Untitled 8 The World is ready..., 2002. Courtesy of the artist

Modernity as Classicism VICENTE CARRETÓN CANO Annoying as it is, we keep insisting that indexing the current creation of glocalized life-worlds –which actually assume a post-national condition- under nationalist labels has become an obsolete practice. How longer ARCO’s strategy to secure it’s “selected” guests’ sponsorships will keep flooding Madrid’s cultural life with a massive invasion of artistic embassies –previously filtered by national hegemonic powers-, thus encouraging a vision of art conceived as public relations branch of political power? La condición postmedia has been framed within the latest Austrian invasion, theoretically justified by Peter Weibel, the artist-theorist whom nobody dares to disagree with, and whose tentacles he spreads all across Europe from his kingdom at ZKM -a museum for media art he directs in Karlsruhe, Germany. Undoubtedly, Vienna was one of the most important psychogeographies on which European modernity was erected, just as nobody doubts that Austrian art pioneered experimental practices with new creative media such as performance, video or interactive electronic systems –particularly, after the superb exhibition Re-Play, about the beginnings of international media art in Austria, curated by Sabine Breitwieser for Vienna’s Generali Foundation in 2000. On the 132 · ARTECONTEXTO · REVIEWS

other hand, we must not forget its role as a privileged promoter of festivals that animated the electronic scene during the last twenty years in such cities as Linz (Ars Electronica) and Graz (Film+Arch). Nevertheless, we prefer not to think that the chosen artists in this and other concurrent shows, actually stand for the most praiseworthy products of such insistence and dedication to the modern and the medial. Otherwise, this effort to strengthen the technological culture would have been unfruitful. All in all, the aforementioned artists must be the proper ones to illustrate the “glorious” theses of the scientific adviser of this project. Certainly, it took a long time for Weibel –who took part in the medial scene from its beginnings- to become aware of the equivalence both between the arts and the materials (the postmedial condition), which in Spain (where we’re supposed to be on the way to…and not coming back yet), as early as 1972, Simón Marchán conceptualized this phenomenon as “the overcoming of categorical limits between [artistic] genres”. However, what’s really upsetting of this image of Austrian postmedial art is its excessive delight in recovering the codes and milestones of Avant-gardes from a formalist approach. This recycling of Modernity as Antiquity and its return as Classicism as part of another cycle of the modern, with an ubiquitous introduction of the dystopian as a surrogate for the uncertain tyranny of the utopian. La condición postmedia is, undeniably, an institutional selection whose only noteworthy exceptions are the GRAF+ZYX projections, the video tableaux vivants by Muntean/Rosenblum, the subliminal words by Ruth Schnell and the communicative cartographies by Annja Krautgasser (an installation that didn’t work in a second visit, just as it occurred in many other cases). As they say, you shouldn’t bite off more than you can chew, and the dull space of Conde Duque eventually gets drowned among the excess of merchandise. It is hard to tell whether one is in ARCO or in Madrid’s downtown, since both spaces have become topologies of severe surveillance –on a micropolitical level as much as on an artistic level-. What we know for sure is that Konrad Becker –the electronic Nosferatu who with his Public Netbase t0 (and institute for new technologies of culture) magnetized international attention towards the then ruined (and today’s sensation) Vienna’s Museums Quartier; as a victim both of commercial speculation with culture’s real state and the repression against intellectual dissidence (all of which was encouraged by the current government’s policies), was eliminated from Austrian cultural map as an undesired presence- would have been a better sensor, at least an independent one, capable to take the pulse to the true reality of media art in Austria, far beyond any institutionalized selection, hierarchized and decadent made by museums, festivals and political powers, with their vision of art as a branch of the tertiary sector of “services”, measurable by real state agencies, tourism boards, education or culture ministries or some embassy, completely deprived of any social or symbolic value -or should I say postsymbolic? Hmmm…I’ll have to consult it with Frank Hartmann. 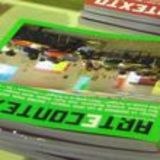