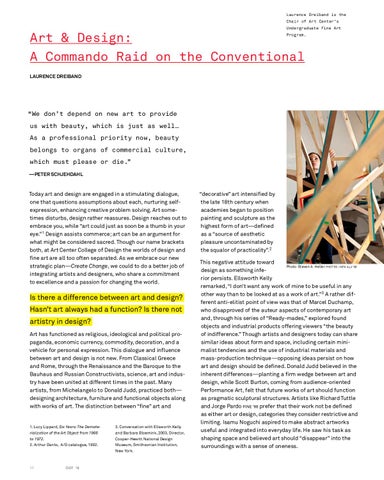 Art & Design: A Commando Raid on the Conventional

“We don’t depend on new art to provide us with beauty, which is just as well… As a professional priority now, beauty belongs to organs of commercial culture, which must please or die.” —PETER SCHJEHDAHL

Today art and design are engaged in a stimulating dialogue, one that questions assumptions about each, nurturing selfexpression, enhancing creative problem solving. Art sometimes disturbs, design rather reassures. Design reaches out to embrace you, while “art could just as soon be a thumb in your eye.”1 Design assists commerce; art can be an argument for what might be considered sacred. Though our name brackets both, at Art Center College of Design the worlds of design and fine art are all too often separated. As we embrace our new strategic plan—Create Change, we could to do a better job of integrating artists and designers, who share a commitment to excellence and a passion for changing the world.

Is there a difference between art and design? Hasn’t art always had a function? Is there not artistry in design? Art has functioned as religious, ideological and political propaganda, economic currency, commodity, decoration, and a vehicle for personal expression. This dialogue and influence between art and design is not new. From Classical Greece and Rome, through the Renaissance and the Baroque to the Bauhaus and Russian Constructivists, science, art and industry have been united at different times in the past. Many artists, from Michelangelo to Donald Judd, practiced both— designing architecture, furniture and functional objects along with works of art. The distinction between “fine” art and

“decorative” art intensified by the late 18th century when academies began to position painting and sculpture as the highest form of art—defined as a “source of aesthetic pleasure uncontaminated by the squalor of practicality”.2 This negative attitude toward Photo: Steven A. Heller PHOT ’85 / MFA ILLU ’98 design as something inferior persists. Ellsworth Kelly remarked, “I don’t want any work of mine to be useful in any other way than to be looked at as a work of art.”3 A rather different anti-elitist point of view was that of Marcel Duchamp, who disapproved of the auteur aspects of contemporary art and, through his series of “Ready-mades,” explored found objects and industrial products offering viewers “the beauty of indifference.” Though artists and designers today can share similar ideas about form and space, including certain minimalist tendencies and the use of industrial materials and mass-production technique—opposing ideas persist on how art and design should be defined. Donald Judd believed in the inherent differences—planting a firm wedge between art and design, while Scott Burton, coming from audience-oriented Performance Art, felt that future works of art should function as pragmatic sculptural structures. Artists like Richard Tuttle and Jorge Pardo FINE ‘88 prefer that their work not be defined as either art or design, categories they consider restrictive and limiting. Isamu Noguchi aspired to make abstract artworks useful and integrated into everyday life. He saw his task as shaping space and believed art should “disappear” into the surroundings with a sense of oneness. 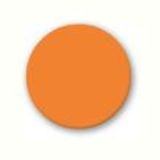 DOT 19 is dedicated to the Art Center College of Design’s new strategic plan, Create Change, which sets the stage for the next era of growth...

DOT 19 is dedicated to the Art Center College of Design’s new strategic plan, Create Change, which sets the stage for the next era of growth...