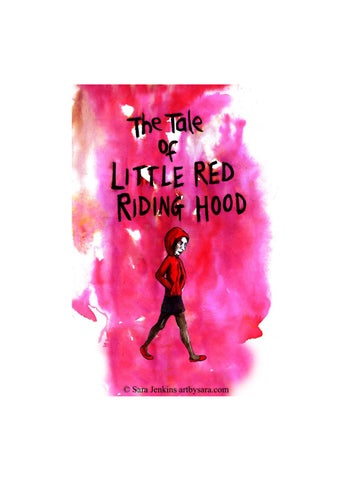 “Granny needs her prescription pills. Pop over luv will you with them, you remember the way don’t you to her new flat? "Through the trading estate under the bypass and over the bridge and it’s opposite the Inn. “Watch out for those dealers with their mean dogs. Don’t look any of them in the eye and if they give a whistle don’t stop or hang around admiring that graffiti as I know you’re wont to do. "Just go straight there and back and make sure she takes her medication while you’re there, she forgets half the time...and give her these extra strong mints for afters. “See you in time for tea and don’t forget I’m off out with the girls tonight, its 80s night at The Palace!” Thus spoke Little Red Riding Hood’s mum whilst doing her hair.

Having finished texting Little Red put the pills in her bag and set off through the trading estate, under the bypass and over the bridge. There as her mother warned her was stood a leery bloke, staffie at side, peddling drugs. He whistled to her and his dog snarled. “Where you off to?” said he. “I’m going to my Granny’s, taking her her prescription.” She replied. “How about some more to add to the mix, these’ll be sure to give her a bigger hit than those pills. Here luv, why not take some? "They’ll put a smile on your face too, could do with it if you don’t mind me sayin’ so.” “No ta.” said she. “Not for me that stuff.” She turned her back and walked away, but bloke and dog followed, and gave her the creeps they did.

“Don’t know why you’re following me. They won’t let you in the block of flats where Granny lives, it’s new, with lots of security.” The dealer clocked which block she meant and an idea formed in his head. He called his dog. “Oi, Fang, come ’ere, let’s be off.” And with that they were gone. Little Red breathed a sigh of relief and ran along, bangles jingling, to her Granny’s flat where the site manager kindly let her in having rung her Granny on the intercom to confirm her identity. Once up on the first floor she knocked on the door and she heard her Granny call out in a deep, gruff voice. “Yes, dear, do come in, the door is unlocked.” She must have a cold thought Little Red, so she quietly opened the door to see her Granny lying on the settee with a duvet pulled right up to her ears. She had a woolly hat pulled down over them and wore huge sunglasses.

“Granny you don’t half look weird. “ Red was not one for beating about the bush. “Do you really need those shades on in here?” “Why yes dear, had laser surgery I did last week to sort out me cataracts. Will be able to see you all the better next week when the bandages are off.” “Granny, what a strong smell of dog there is in here.” A lump moved under the duvet and growled. “Aaagggh yes me dear, t’is just me belly, not been behavin’ as it should, it’s all those branflakes for breakfast the doctor keeps recommending me, gives me right bad wind. Apologies for the smell.” “Granny, what big hands you have and those tattoos, I never knew you had them!” “Aaaggghhh, the bloke next door, Frankie, was a tattoo artist in his time, still does tats now and then and I always fancied a tat. Nice eh?” “Granny, what big teeth you have, you got some new falsies?” “Yes, dear, and all the better to kiss you with!”

With that Granny jumped off the settee, threw off the hat and shades and leapt on top of Little Red. It was none other than the dealer with his dog in tow who grabbed her ankle with his sharp nasty teeth. Little Red screamed like never before as the dealer put his hand around her throat and tried to force several pills down it. Turning her head and gasping for air she caught sight of the orange emergency cord hanging from the ceiling. With a massive surge of strength she reached out and pulled it. A moment later Pam the site manager was heard over the intercom. “Nancy, are you alright dear? We’re on our way!” The dealer froze at the sound of the Yorkshire vowels of Pam, leapt off Red, ran over to the window and threw himself out. There was a horrific shriek of pain as he impaled himself on the circular washing line.

Ater a quick search Little Red’s Granny was found locked in the bathroom and high as a kite. A strong brew and several tots of whiskey later she came around, quite disappointed to find she wasn’t sat in bed with Roger Moore as she believed herself to be. She related how a bloke she thought to be a window cleaner had come in for a cuppa and he’d dropped some special sweetener pills into her brew. The last thing she remembered was feeling like she was eighteen years old again and jiving like a demon with Roger Moore, her hair backcombed and him in a sharp suit. The dealer was driven away in an ambulance having been resuscitated by Pam which to be honest was the last thing she wanted to do but as site manager and trained up to the eyeballs in saving lives, she did her duty.

And Fang the staffie? Well, the police wanted him put down but Little Red objected so vociferously she was allowed to keep him so long as she took him to obedience classes which was asking a lot she thought, but they both survived the ordeal. Little Red came out of her tussle with the dealer relatively unscathed, though the teeth marks of Fang did stay with her for the rest of her life like a tattoo on her ankle. Sometimes I see them walking down the street, her with her music in her ears and him pissing on posts and scavenging chips dropped on the pavement by kids. 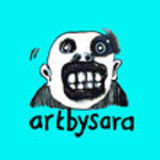 Little Red Riding Hood visits her Granny through the trading estate and under the bypass. On the way she has an adventure.

Little Red Riding Hood visits her Granny through the trading estate and under the bypass. On the way she has an adventure.