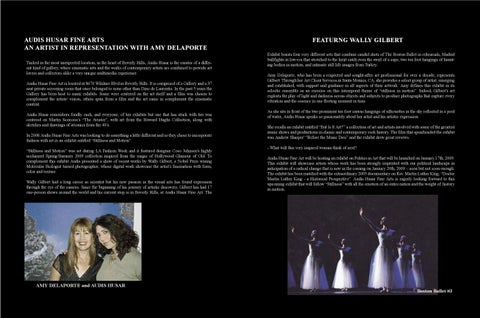 AUDIS HUSAR FINE ARTS AN ARTIST IN REPRESENTATION WITH AMY DELAPORTE Tucked in the most unexpected location, in the heart of Beverly Hills, Audis Husar is the curator of a different kind of gallery, where cinematic arts and the works of contemporary artists are combined to provide art lovers and collectors alike a very unique multimedia experience. Audis Husar Fine Art is located at 8670 Wilshire Blvd in Beverly Hills. It is comprised of a Gallery and a 37 seat private screening room that once belonged to none other than Dino de Laurentis. In the past 5 years the Gallery has been host to many exhibits. Some were centered on the art itself and a film was chosen to complement the artists’ vision, others spun from a film and the art came in complement the cinematic content. Audis Husar remembers fondly each, and everyone, of her exhibits but one that has stuck with her was centered on Martin Scorcese’s “The Aviator”, with art from the Howard Hughs Collection, along with sketches and drawings of avionics from the 40’s. In 2008 Audis Husar Fine Arts was looking to do something a little different and so they chose to incorporate fashion with art in an exhibit entitled “Stillness and Motion”. “Stillness and Motion” was set during LA Fashion Week and it featured designer Coco Johnsen’s highly acclaimed Spring/Summer 2009 collection inspired from the magic of Hollywood Glamour of Old. To complement this exhibit Audis presented a show of recent works by Wally Gilbert, a Nobel Prize wining Molecular Biologist turned photographer, whose digital work showcase the artist’s fascination with form, color and texture. Wally Gilbert had a long career as scientist but his new passion in the visual arts has found expression through the eye of the camera. Since the beginning of his journey of artistic discovery, Gilbert has had 17 one-person shows around the world and his current stop is in Beverly Hills, at Audis Husar Fine Art. The

FEATURNG WALLY GILBERT Exhibit boasts four very different sets that combine candid shots of The Boston Ballet in rehearsals, Madrid bullfights in low-res that stretched to the limit catch even the swirl of a cape, two ten foot hangings of haunting bodies in motion, and intimate still life images from Turkey. Amy Delaporte, who has been a respected and sought-after art professional for over a decade, represents Gilbert. Through her Art Client Services in Santa Monica, CA, she provides a select group of artist, emerging and established, with support and guidance in all aspects of their artwork. Amy defines this exhibit in its eclectic ensemble as an exercise on this intemporal theme of “stillness in motion”. Indeed, Gilbert’s art exploits the play of light and darkness across objects and subjects to produce photographs that capture every vibration and the essence in one fleeting moment in time. As she sits in front of the two prominent ten foot canvas hangings of silhouettes in the sky reflected in a pool of water, Audis Husar speaks so passionately about her artist and his artistic expression. She recalls an exhibit entitled “But Is It Art?” a collection of art and artists involved with some of the greatest music shows and productions in classic and contemporary rock history. The film that spearheaded the exhibit was Andrew Sharper&#39; “Before the Music Dies” and the exhibit drew great reviews. - What will this very inspired woman think of next? Audis Husar Fine Art will be hosting an exhibit on Politics in Art that will be launched on January 17th, 2009. This exhibit will showcase artists whose work has been strongly imprinted with our political landscape in anticipation of a radical change that is now in the coming on January 20th, 2009 – soon but not soon enough. The exhibit has been matched with the extraordinary 2005 documentary on Rev. Martin Luther King, “Doctor Martin Luther King - a Historical Prospective”. Audis Husar Fine Arts is eagerly looking forward to this upcoming exhibit that will follow “Stillness” with all the emotion of an entire nation and the weight of history in motion. 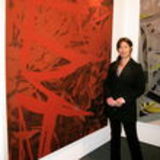