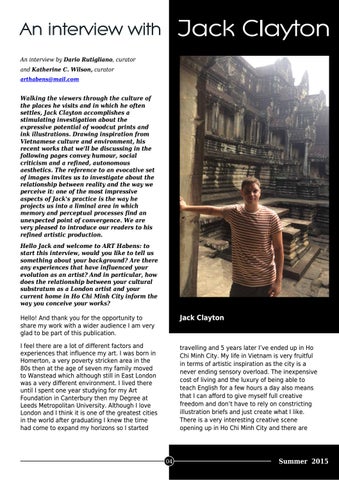 Walking the viewers through the culture of the places he visits and in which he often settles, Jack Clayton accomplishes a stimulating investigation about the expressive potential of woodcut prints and ink illustrations. Drawing inspiration from Vietnamese culture and environment, his recent works that we&#39;ll be discussing in the following pages convey humour, social criticism and a refined, autonomous aesthetics. The reference to an evocative set of images invites us to investigate about the relationship between reality and the way we perceive it: one of the most impressive aspects of Jack&#39;s practice is the way he projects us into a liminal area in which memory and perceptual processes find an unexpected point of convergence. We are very pleased to introduce our readers to his refined artistic production. Hello Jack and welcome to ART Habens: to start this interview, would you like to tell us something about your background? Are there any experiences that have influenced your evolution as an artist? And in particular, how does the relationship between your cultural substratum as a London artist and your current home in Ho Chi Minh City inform the way you conceive your works?

Hello! And thank you for the opportunity to share my work with a wider audience I am very glad to be part of this publication.

I feel there are a lot of different factors and experiences that influence my art. I was born in Homerton, a very poverty stricken area in the 80s then at the age of seven my family moved to Wanstead which although still in East London was a very different environment. I lived there until I spent one year studying for my Art Foundation in Canterbury then my Degree at Leeds Metropolitan University. Although I love London and I think it is one of the greatest cities in the world after graduating I knew the time had come to expand my horizons so I started

travelling and 5 years later Iâ&amp;#x20AC;&amp;#x2122;ve ended up in Ho Chi Minh City. My life in Vietnam is very fruitful in terms of artistic inspiration as the city is a never ending sensory overload. The inexpensive cost of living and the luxury of being able to teach English for a few hours a day also means that I can afford to give myself full creative freedom and donâ&amp;#x20AC;&amp;#x2122;t have to rely on constricting illustration briefs and just create what I like. There is a very interesting creative scene opening up in Ho Chi Minh City and there are 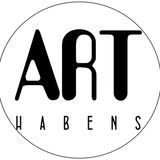