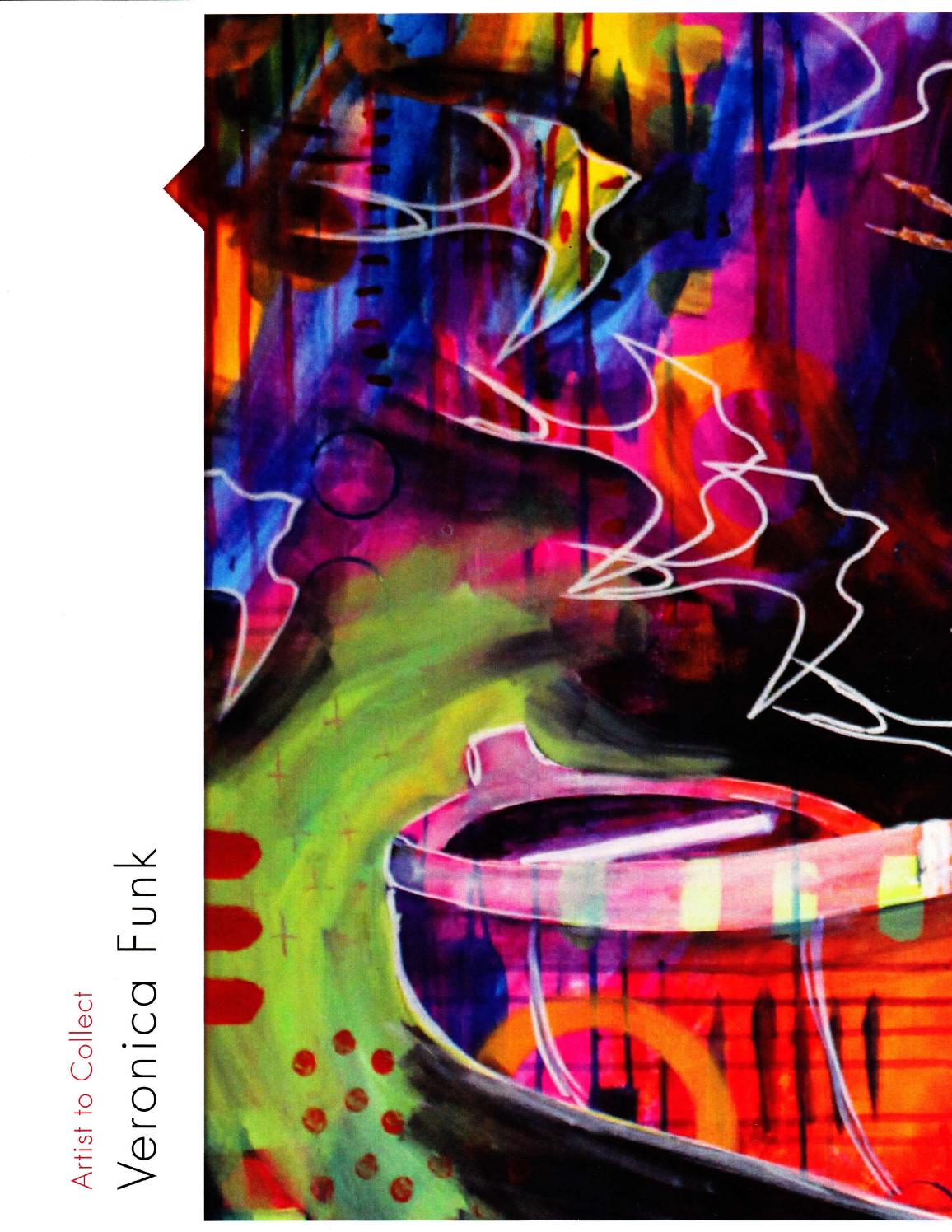 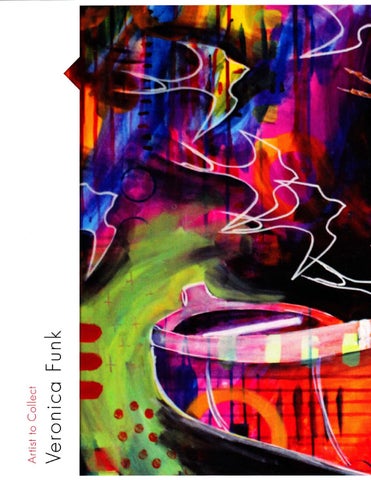 Through her inspirational art, Veronica Funk openly shares with the world a remarkable healing journey. &quot;Though I missed my northern community terribly for many years, in this new body of work I have finally found a way to fill the hole left in my heart when I left the north. This work - each piece both a symbolic representation of and also physically a sacred vessel for me - is filled with the images, colours and symbols of my memory.&quot; Veronica grew up in northern Manitoba where

her entire world was influenced by the Cree culture. On one of many trips up the Churchill River as a young girl, she saw her first pictographs

drawn on stone outcroppings high above the

waterline. They were so far down from the land on top of them that she could not help but wonder

how anyone today could reach that space to draw, never mind thousands of years ago. Things like this kept her full of awe and gave her a sense of the scope and wonder of our world. &quot; I was enamoured by the works of the Woodland

Artists and was exposed to my first exhibits of works by Benjamin Chee Chee and lsaac Bignell at the Exhibition Centre,&quot; she remembers. &quot;With my classmates, I visited an archaeological site near rapids on Churchill River, the ones after which my community of Leaf Rapids was named. &quot; At 17 , Veronica&#39;s family moved to Alberta, &quot;when the life of the local mine became tenuous and my heart was broken. I cried to return to the silence of the boreal forest of the north, to the endless and abundantly clean waters, and to the aurora borealis in all its glory. ln 1988, I returned with my now husband, to be married. Though

things had changed since I left, because of the struggles of the mine and, in turn, the struggles of the entire community, the land and its history remained. I spent hours in the Exhibition Centre, dreaming of the days I was taught to weave and to bead, and of the times I spent in the woods with my childhood friends. This place north of 56 where I learned to survive in the wilderness as part of my public education; where we came together to celebrate the Winter Carnival, racing in snowshoes, baking bannock, watching the dog sled races; where we were raised to nurture nature. I never wanted to leave.&quot;

Capturing the Spirit Since becoming a professional artist, Veronica&#39;s singular goal has been to create a sanctuary, a quiet place of contemplation, an inviting place to be still. Combining simplicity, light and vibrant colour through the use of opaque and transparent acrylic glazes, she draws with her brush, slightly

distorting and manipulating her subjects to

share the beauty of imper{ection. The resulting soft, sculptural forms draw the viewer outside of themselves and into their spiritual selves. ln the mid-1980s Veronica studied Art and Design at Red Deer College and, after meeting the man who would become her husband, moved back to Manitoba. Once there, she continued to

mentor with artists through the Winnipeg Art Gallery. Her biggest influencers at the time were those who taught her to push the boundaries of colour. She also remembers how studying stone carving with Michael Many Eagles helped her develop her own personal style. &quot;ln my work today, I still see the influences of both in my vibrant use of colour and of carving and design

to create stamps and stencils.&quot;

About ten years ago, Veronica was at

crossroads in her creative journey and almost gave it up. A few bad experiences in the art world had left her feeling it was just too difficult to pursue. She stopped painting and got what was considered a real job but, even though it was a

good job, Veronica fell into a depression. &quot;l was bursting into tears in the most unusual moments, &quot;

new and unexpected ways. Take the images of wildflowers that grow from her canvas; she says

she explains. &quot;Since clinical depression runs in my family, I thought that was it... but my family knew

that it might be because of Emily Dickinson and her love of nature and gardening, or perhaps it was the healing traits of these flowers that she learned among the Cree, but their beauty

better. They told me to start painting again and so I did, but this time purely for myself. &quot;

It&#39;s well known that art can be a capricious mistress. As Veronica puts it, &quot;One minute you can be admired and it seems as though you can do nothing wrong, but then that subsides and those people move on to the next artist. At this

point, you must decide whether you want to do the work for the pure joy of it or try something else, and if you keep working they will show up at your door once again to see what you have done. lf there is nothing new, they will move on and probably never return. I have found this to be true and now choose carefully who I will work with... it has to be a symbiotic relationship built on trust and mutual respect.&quot;

Painting what she loves, painting healing images, has left her connected to her art work in

nurtures her as she paints. Another significant project was Totem Animals,

where she spent 52 weeks painting an animal

week. She explains, &quot;As a child I heard many stories

about the importance of animals as messengers who can teach us so many things about ourselves and the wodd around us. As meditation can help us listen to that still voice inside, these messengers also guide us when we begin to pay attention to our surroundings. Having the privilege of working

on this year-long labour of love, I remembered nature and the wild animals I had connected with

in my life. By paying close attention we can find our own personal guides to help us along on our journey in this life; who teach us to find the best in ourselves and in others.&quot;

Her creation process happened by lucky accident. &quot;At one point I was working on abstraction to help me better understand colour relationships and to foster personal artistic growth, and suddenly I connected that work to the representational work I had been doing. Now I tend to work more intuitively, layering colour and pattern before adding an image. Typically, as part of my process, I prefer to work on larger stretched canvas, using acrylic paints, my hands, stencils, brayers, a spray bottle of water and different types of paintbrushes, as well as unusual tools such as container lids to create a base layer with a variety of marks. I also tend to incorporate a number of pictographs, or cave line drawings, that I have been inspired by through hikes in the prairies and the nearby Rocky Mountains. On top of this base, I begin to add outlines of images such as canoes, tipis and animals, which I continue to paint around and over in order to create an ethereal piece that speaks to dreams and memories.&quot; Beyond the Studio &quot;l have been blessed with many highlights in my career,&quot;

Veronica says. &quot;There have been many interviews and publications, but recently the most notable happenings are the ownership of my work by a First Nations Reservation and by former Prime Minister Lester B. Pearson&#39;s daughter-inlaw, Landon Pearson, who has been an incredible advocate

for children&#39;s rights. &quot; Those sort of things, the impact and connectedness to the community, are part of what Veronica holds sacred. Although she is an introvert by nature, and spends a lot of time in what she terms personal creative exploration, she also moves outside of herself to work as the Arts and Culture Coordinator for her public library. What she loves about this is being involved in the growth of art and culture in the community. &quot;ln a time when schools are losing not only their libraries but also their art classrooms,&quot; Veronica explains, &quot;I feel it is imperative that we offer young people an opportunity to develop creatively and be exposed to a myriad of mediums and a variety of artists and methods. Several years ago, I realized how the value of community is still extremely important to me. Just like my community in the north, being involved in the arts locally is extremely rewarding, and due to my contribution I was recently honoured as the recipient of the Fortis Alberta Arts Professional Artist Award at the Airdrie Mayor&#39;s Night of the Arts. &quot; It pleases Veronica that her work brings joy to other people. lndeed, many of her paintings have sold quite quickly. &quot;l&#39;m

colour palette or patterns that draw someone? Or a combination of all? Almost half of the works have

already found their new owners and I hope they can be as much of a blessing to those people as they have been to me.&quot; To see more of Veronica Funk&#39;s work, and engage deeper in her thoughts, navigate over to www.veronicafunk.com Veronica Funk is represented by the following galleries: