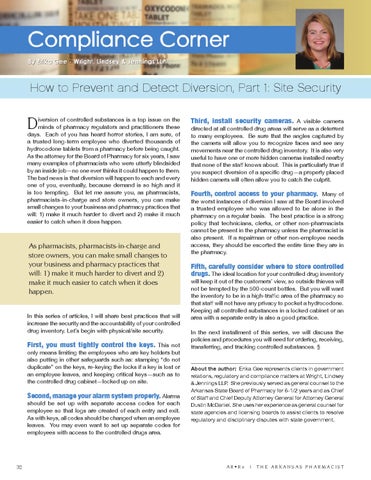 How to Prevent and Detect Diversion, Part 1: Site Security

iversion of controlled substances is a top issue on the minds of pharmacy regulators and practitioners these days. Each of you has heard horror stories, I am sure, of a trusted long-term employee who diverted thousands of hydrocodone tablets from a pharmacy before being caught. As the attorney for the Board of Pharmacy for six years, I saw many examples of pharmacists who were utterly blindsided by an inside job—no one ever thinks it could happen to them. The bad news is that diversion will happen to each and every one of you, eventually, because demand is so high and it is too tempting. But let me assure you, as pharmacists, pharmacists-in-charge and store owners, you can make small changes to your business and pharmacy practices that will: 1) make it much harder to divert and 2) make it much easier to catch when it does happen.

As pharmacists, pharmacists-in-charge and store owners, you can make small changes to your business and pharmacy practices that will: 1) make it much harder to divert and 2) make it much easier to catch when it does happen. In this series of articles, I will share best practices that will increase the security and the accountability of your controlled drug inventory. Let’s begin with physical/site security.

First, you must tightly control the keys.

This not only means limiting the employees who are key holders but also putting in other safeguards such as: stamping “do not duplicate” on the keys, re-keying the locks if a key is lost or an employee leaves, and keeping critical keys—such as to the controlled drug cabinet—locked up on site.

should be set up with separate access codes for each employee so that logs are created of each entry and exit. As with keys, all codes should be changed when an employee leaves. You may even want to set up separate codes for employees with access to the controlled drugs area.

A visible camera directed at all controlled drug areas will serve as a deterrent to many employees. Be sure that the angles captured by the camera will allow you to recognize faces and see any movements near the controlled drug inventory. It is also very useful to have one or more hidden cameras installed nearby that none of the staff knows about. This is particularly true if you suspect diversion of a specific drug—a properly placed hidden camera will often allow you to catch the culprit.

Many of the worst instances of diversion I saw at the Board involved a trusted employee who was allowed to be alone in the pharmacy on a regular basis. The best practice is a strong policy that technicians, clerks, or other non-pharmacists cannot be present in the pharmacy unless the pharmacist is also present. If a repairman or other non-employee needs access, they should be escorted the entire time they are in the pharmacy.

Fifth, carefully consider where to store controlled drugs. The ideal location for your controlled drug inventory will keep it out of the customers’ view, so outside thieves will not be tempted by the 500-count bottles. But you will want the inventory to be in a high-traffic area of the pharmacy so that staff will not have any privacy to pocket a hydrocodone. Keeping all controlled substances in a locked cabinet or an area with a separate entry is also a good practice.

About the author: Erika Gee represents clients in government relations, regulatory and compliance matters at Wright, Lindsey & Jennings LLP. She previously served as general counsel to the Arkansas State Board of Pharmacy for 6-1/2 years and as Chief of Staff and Chief Deputy Attorney General for Attorney General Dustin McDaniel. She uses her experience as general counsel for state agencies and licensing boards to assist clients to resolve regulatory and disciplinary disputes with state government.