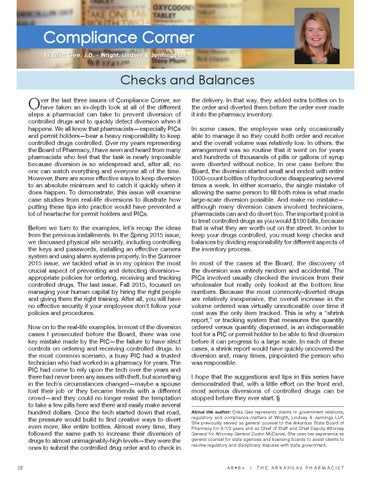 ver the last three issues of Compliance Corner, we have taken an in-depth look at all of the different steps a pharmacist can take to prevent diversion of controlled drugs and to quickly detect diversion when it happens. We all know that pharmacists—especially PICs and permit holders—bear a heavy responsibility to keep controlled drugs controlled. Over my years representing the Board of Pharmacy, I have seen and heard from many pharmacists who feel that the task is nearly impossible because diversion is so widespread and, after all, no one can watch everything and everyone all of the time. However, there are some effective ways to keep diversion to an absolute minimum and to catch it quickly when it does happen. To demonstrate, this issue will examine case studies from real-life diversions to illustrate how putting these tips into practice would have prevented a lot of heartache for permit holders and PICs. Before we turn to the examples, let’s recap the ideas from the previous installments. In the Spring 2015 issue, we discussed physical site security, including controlling the keys and passwords, installing an effective camera system and using alarm systems properly. In the Summer 2015 issue, we tackled what is in my opinion the most crucial aspect of preventing and detecting diversion— appropriate policies for ordering, receiving and tracking controlled drugs. The last issue, Fall 2015, focused on managing your human capital by hiring the right people and giving them the right training. After all, you will have no effective security if your employees don’t follow your policies and procedures. Now on to the real-life examples. In most of the diversion cases I prosecuted before the Board, there was one key mistake made by the PIC—the failure to have strict controls on ordering and receiving controlled drugs. In the most common scenario, a busy PIC had a trusted technician who had worked in a pharmacy for years. The PIC had come to rely upon the tech over the years and there had never been any issues with theft, but something in the tech’s circumstances changed—maybe a spouse lost their job or they became friends with a different crowd—and they could no longer resist the temptation to take a few pills here and there and easily make several hundred dollars. Once the tech started down that road, the pressure would build to find creative ways to divert even more, like entire bottles. Almost every time, they followed the same path to increase their diversion of drugs to almost unimaginably-high levels—they were the ones to submit the controlled drug order and to check in 18

the delivery. In that way, they added extra bottles on to the order and diverted them before the order ever made it into the pharmacy inventory. In some cases, the employee was only occasionally able to manage it so they could both order and receive and the overall volume was relatively low. In others, the arrangement was so routine that it went on for years and hundreds of thousands of pills or gallons of syrup were diverted without notice. In one case before the Board, the diversion started small and ended with entire 1000-count bottles of hydrocodone disappearing several times a week. In either scenario, the single mistake of allowing the same person to fill both roles is what made large-scale diversion possible. And make no mistake— although many diversion cases involved technicians, pharmacists can and do divert too. The important point is to treat controlled drugs as you would $100 bills, because that is what they are worth out on the street. In order to keep your drugs controlled, you must keep checks and balances by dividing responsibility for different aspects of the inventory process. In most of the cases at the Board, the discovery of the diversion was entirely random and accidental. The PICs involved usually checked the invoices from their wholesaler but really only looked at the bottom line numbers. Because the most commonly-diverted drugs are relatively inexpensive, the overall increase in the volume ordered was virtually unnoticeable over time if cost was the only item tracked. This is why a “shrink report,” or tracking system that measures the quantity ordered versus quantity dispensed, is an indispensable tool for a PIC or permit holder to be able to find diversion before it can progress to a large scale. In each of these cases, a shrink report would have quickly uncovered the diversion and, many times, pinpointed the person who was responsible. I hope that the suggestions and tips in this series have demonstrated that, with a little effort on the front end, most serious diversions of controlled drugs can be stopped before they ever start. § ________________________________________________________

About the author: Erika Gee represents clients in government relations, regulatory and compliance matters at Wright, Lindsey & Jennings LLP. She previously served as general counsel to the Arkansas State Board of Pharmacy for 6-1/2 years and as Chief of Staff and Chief Deputy Attorney General for Attorney General Dustin McDaniel. She uses her experience as general counsel for state agencies and licensing boards to assist clients to resolve regulatory and disciplinary disputes with state government.