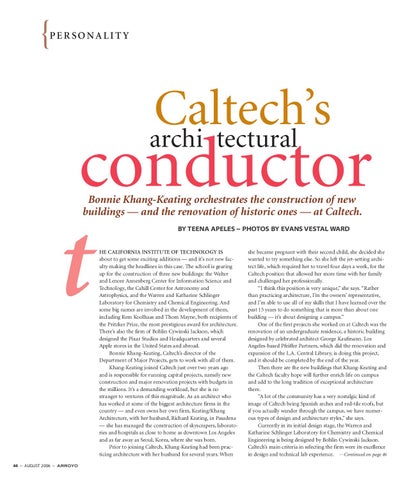 conductor Bonnie Khang-Keating orchestrates the construction of new buildings — and the renovation of historic ones — at Caltech.

HE CALIFORNIA INSTITUTE OF TECHNOLOGY IS about to get some exciting additions — and it’s not new faculty making the headlines in this case. The school is gearing up for the construction of three new buildings: the Walter and Lenore Annenberg Center for Information Science and Technology, the Cahill Center for Astronomy and Astrophysics, and the Warren and Katharine Schlinger Laboratory for Chemistry and Chemical Engineering. And some big names are involved in the development of them, including Rem Koolhaas and Thom Mayne, both recipients of the Pritzker Prize, the most prestigious award for architecture. There’s also the firm of Bohlin Cywinski Jackson, which designed the Pixar Studios and Headquarters and several Apple stores in the United States and abroad. Bonnie Khang-Keating, Caltech’s director of the Department of Major Projects, gets to work with all of them. Khang-Keating joined Caltech just over two years ago and is responsible for running capital projects, namely new construction and major renovation projects with budgets in the millions. It’s a demanding workload, but she is no stranger to ventures of this magnitude. As an architect who has worked at some of the biggest architecture firms in the country — and even owns her own firm, Keating/Khang Architecture, with her husband, Richard Keating, in Pasadena — she has managed the construction of skyscrapers, laboratories and hospitals as close to home as downtown Los Angeles and as far away as Seoul, Korea, where she was born. Prior to joining Caltech, Khang-Keating had been practicing architecture with her husband for several years. When

she became pregnant with their second child, she decided she wanted to try something else. So she left the jet-setting architect life, which required her to travel four days a week, for the Caltech position that allowed her more time with her family and challenged her professionally. “I think this position is very unique,” she says. “Rather than practicing architecture, I’m the owners’ representative, and I’m able to use all of my skills that I have learned over the past 15 years to do something that is more than about one building — it’s about designing a campus.” One of the first projects she worked on at Caltech was the renovation of an undergraduate residence, a historic building designed by celebrated architect George Kaufmann. Los Angeles-based Pfeiffer Partners, which did the renovation and expansion of the L.A. Central Library, is doing this project, and it should be completed by the end of the year. Then there are the new buildings that Khang-Keating and the Caltech faculty hope will further enrich life on campus and add to the long tradition of exceptional architecture there. “A lot of the community has a very nostalgic kind of image of Caltech being Spanish arches and red-tile roofs, but if you actually wander through the campus, we have numerous types of design and architecture styles,” she says. Currently in its initial design stage, the Warren and Katharine Schlinger Laboratory for Chemistry and Chemical Engineering is being designed by Bohlin Cywinski Jackson. Caltech’s main criteria in selecting the firm were its excellence in design and technical lab experience. —Continued on page 46 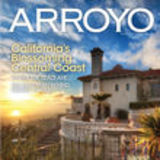