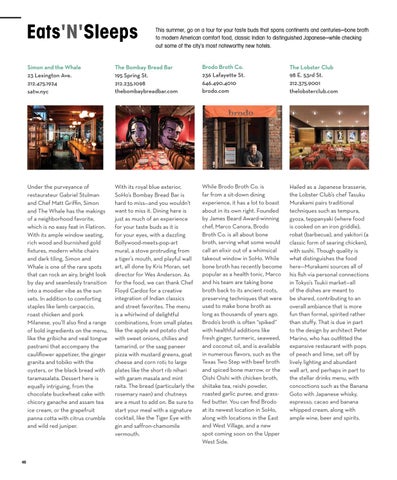 This summer, go on a tour for your taste buds that spans continents and centuries—bone broth to modern American comfort food, classic Indian to distinguished Japanese—while checking out some of the city’s most noteworthy new hotels.

Under the purveyance of restaurateur Gabriel Stulman and Chef Matt Griffin, Simon and The Whale has the makings of a neighborhood favorite, which is no easy feat in Flatiron. With its ample window seating, rich wood and burnished gold fixtures, modern white chairs and dark tiling, Simon and Whale is one of the rare spots that can rock an airy, bright look by day and seamlessly transition into a moodier vibe as the sun sets. In addition to comforting staples like lamb carpaccio, roast chicken and pork Milanese, you’ll also find a range of bold ingredients on the menu, like the gribiche and veal tongue pastrami that accompany the cauliflower appetizer, the ginger granita and tobiko with the oysters, or the black bread with taramasalata. Dessert here is equally intriguing, from the chocolate buckwheat cake with chicory ganache and assam tea ice cream, or the grapefruit panna cotta with citrus crumble and wild red juniper.

With its royal blue exterior, SoHo’s Bombay Bread Bar is hard to miss—and you wouldn’t want to miss it. Dining here is just as much of an experience for your taste buds as it is for your eyes, with a dazzling Bollywood-meets-pop-art mural, a stove protruding from a tiger’s mouth, and playful wall art, all done by Kris Moran, set director for Wes Anderson. As for the food, we can thank Chef Floyd Cardoz for a creative integration of Indian classics and street favorites. The menu is a whirlwind of delightful combinations, from small plates like the apple and potato chat with sweet onions, chilies and tamarind, or the saag paneer pizza with mustard greens, goat cheese and corn roti; to large plates like the short rib nihari with garam masala and mint raita. The bread (particularly the rosemary naan) and chutneys are a must to add on. Be sure to start your meal with a signature cocktail, like the Tiger Eye with gin and saffron-chamomile vermouth.

While Brodo Broth Co. is far from a sit-down dining experience, it has a lot to boast about in its own right. Founded by James Beard Award-winning chef, Marco Canora, Brodo Broth Co. is all about bone broth, serving what some would call an elixir out of a whimsical takeout window in SoHo. While bone broth has recently become popular as a health tonic, Marco and his team are taking bone broth back to its ancient roots, preserving techniques that were used to make bone broth as long as thousands of years ago. Brodo’s broth is often “spiked” with healthful additions like fresh ginger, turmeric, seaweed, and coconut oil, and is available in numerous flavors, such as the Texas Two Step with beef broth and spiced bone marrow, or the Oishi Oishi with chicken broth, shiitake tea, reishi powder, roasted garlic puree, and grassfed butter. You can find Brodo at its newest location in SoHo, along with locations in the East and West Village, and a new spot coming soon on the Upper West Side.

Hailed as a Japanese brasserie, the Lobster Club’s chef Tasuku Murakami pairs traditional techniques such as tempura, gyoza, teppanyaki (where food is cooked on an iron griddle), robat (barbecue), and yakitori (a classic form of searing chicken), with sushi. Though quality is what distinguishes the food here—Murakami sources all of his fish via personal connections in Tokyo’s Tsukii market—all of the dishes are meant to be shared, contributing to an overall ambiance that is more fun than formal, spirited rather than stuffy. That is due in part to the design by architect Peter Marino, who has outfitted the expansive restaurant with pops of peach and lime, set off by lively lighting and abundant wall art, and perhaps in part to the stellar drinks menu, with concoctions such as the Banana Goto with Japanese whisky, espresso, cacao and banana whipped cream, along with ample wine, beer and spirits.

Array Magazine - Summer 2018 ARRAY Magazine brings the most interesting people, places and ideas in interior design into the homes and offices of both design professionals and consumers, featuring the best of the New York Design Center. 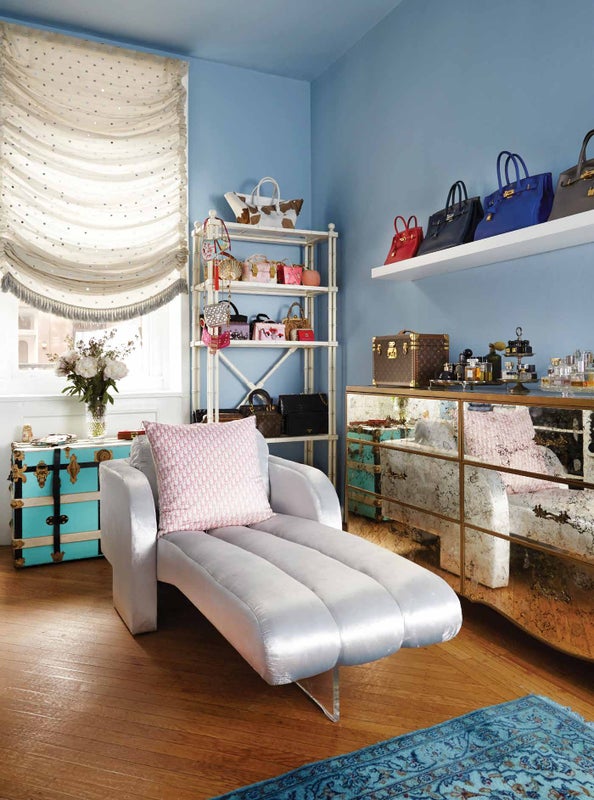 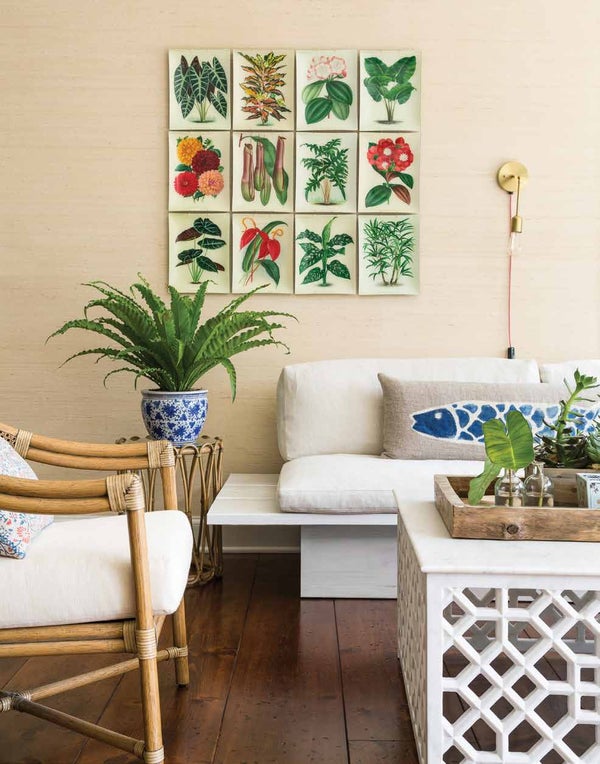 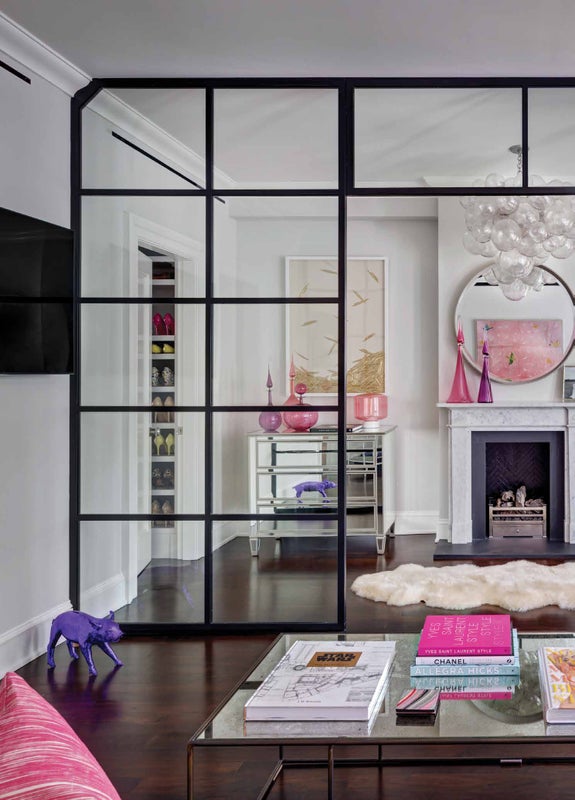