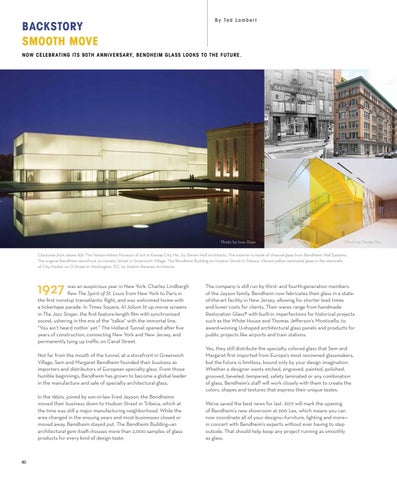 Clockwise from above left: The Nelson-Atkins Museum of Art in Kansas City, Mo., by Steven Holl Architects. The exterior is made of channel glass from Bendheim Wall Systems. The original Bendheim storefront on Horatio Street in Greenwich Village. The Bendheim Building on Hudson Street in Tribeca. Vibrant yellow laminated glass in the stairwells of City Market on O Street in Washington, DC, by Shalom Baranes Architects.

was an auspicious year in New York. Charles Lindbergh flew The Spirit of St. Louis from New York to Paris in the first nonstop transatlantic flight, and was welcomed home with a tickertape parade. In Times Square, Al Jolson lit up movie screens in The Jazz Singer, the first feature-length film with synchronized sound, ushering in the era of the “talkie” with the immortal line, “You ain’t heard nothin’ yet.” The Holland Tunnel opened after five years of construction, connecting New York and New Jersey, and permanently tying up traffic on Canal Street. Not far from the mouth of the tunnel, at a storefront in Greenwich Village, Sem and Margaret Bendheim founded their business as importers and distributors of European specialty glass. From those humble beginnings, Bendheim has grown to become a global leader in the manufacture and sale of specialty architectural glass. In the 1950s, joined by son-in-law Fred Jayson, the Bendheims moved their business down to Hudson Street in Tribeca, which at the time was still a major manufacturing neighborhood. While the area changed in the ensuing years and most businesses closed or moved away, Bendheim stayed put. The Bendheim Building—an architectural gem itself—houses more than 2,000 samples of glass products for every kind of design taste.

The company is still run by third- and fourth-generation members of the Jayson family. Bendheim now fabricates their glass in a stateof-the-art facility in New Jersey, allowing for shorter lead times and lower costs for clients. Their wares range from handmade Restoration Glass® with built-in imperfections for historical projects such as the White House and Thomas Jefferson’s Monticello, to award-winning U-shaped architectural glass panels and products for public projects like airports and train stations. Yes, they still distribute the specialty colored glass that Sem and Margaret first imported from Europe’s most renowned glassmakers, but the future is limitless, bound only by your design imagination. Whether a designer wants etched, engraved, painted, polished, grooved, beveled, tempered, safety laminated or any combination of glass, Bendheim’s staff will work closely with them to create the colors, shapes and textures that express their unique tastes. We’ve saved the best news for last. 2017 will mark the opening of Bendheim’s new showroom at 200 Lex, which means you can now coordinate all of your designs—furniture, lighting and more— in concert with Bendheim’s experts without ever having to step outside. That should help keep any project running as smoothly as glass.

Array Magazine - Summer 2017 ARRAY Magazine brings the most interesting people, places and ideas in interior design into the homes and offic...

Array Magazine - Summer 2017 ARRAY Magazine brings the most interesting people, places and ideas in interior design into the homes and offic...