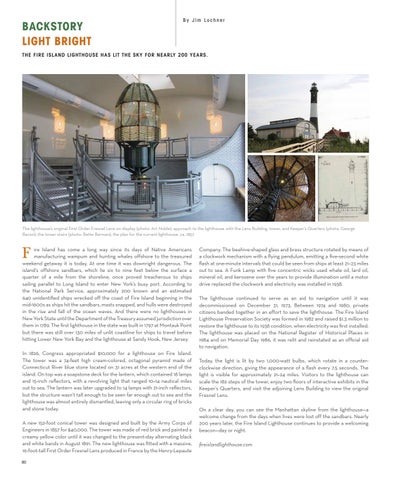 T he Fire I sland L ighthouse has lit the sky for nearly 200 years .

ire Island has come a long way since its days of Native Americans manufacturing wampum and hunting whales offshore to the treasured weekend getaway it is today. At one time it was downright dangerous. The island’s offshore sandbars, which lie six to nine feet below the surface a quarter of a mile from the shoreline, once proved treacherous to ships sailing parallel to Long Island to enter New York’s busy port. According to the National Park Service, approximately 200 known and an estimated 640 unidentified ships wrecked off the coast of Fire Island beginning in the mid-1600s as ships hit the sandbars, masts snapped, and hulls were destroyed in the rise and fall of the ocean waves. And there were no lighthouses in New York State until the Department of the Treasury assumed jurisdiction over them in 1789. The first lighthouse in the state was built in 1797 at Montauk Point but there was still over 130 miles of unlit coastline for ships to travel before hitting Lower New York Bay and the lighthouse at Sandy Hook, New Jersey. In 1826, Congress appropriated $10,000 for a lighthouse on Fire Island. The tower was a 74-feet high cream-colored, octagonal pyramid made of Connecticut River blue stone located on 31 acres at the western end of the island. On top was a soapstone deck for the lantern, which contained 18 lamps and 15-inch reflectors, with a revolving light that ranged 10–14 nautical miles out to sea. The lantern was later upgraded to 14 lamps with 21-inch reflectors, but the structure wasn’t tall enough to be seen far enough out to sea and the lighthouse was almost entirely dismantled, leaving only a circular ring of bricks and stone today. A new 152-foot conical tower was designed and built by the Army Corps of Engineers in 1857 for $40,000. The tower was made of red brick and painted a creamy yellow color until it was changed to the present-day alternating black and white bands in August 1891. The new lighthouse was fitted with a massive, 16-foot-tall First Order Fresnel Lens produced in France by the Henry-Lepaute 80

Company. The beehive-shaped glass and brass structure rotated by means of a clockwork mechanism with a flying pendulum, emitting a five-second white flash at one-minute intervals that could be seen from ships at least 21–23 miles out to sea. A Funk Lamp with five concentric wicks used whale oil, lard oil, mineral oil, and kerosene over the years to provide illumination until a motor drive replaced the clockwork and electricity was installed in 1938. The lighthouse continued to serve as an aid to navigation until it was decommissioned on December 31, 1973. Between 1974 and 1980, private citizens banded together in an effort to save the lighthouse. The Fire Island Lighthouse Preservation Society was formed in 1982 and raised $1.3 million to restore the lighthouse to its 1938 condition, when electricity was first installed. The lighthouse was placed on the National Register of Historical Places in 1984 and on Memorial Day 1986, it was relit and reinstated as an official aid to navigation. Today, the light is lit by two 1,000-watt bulbs, which rotate in a counterclockwise direction, giving the appearance of a flash every 7.5 seconds. The light is visible for approximately 21–24 miles. Visitors to the lighthouse can scale the 182 steps of the tower, enjoy two floors of interactive exhibits in the Keeper’s Quarters, and visit the adjoining Lens Building to view the original Fresnel Lens. On a clear day, you can see the Manhattan skyline from the lighthouse—a welcome change from the days when lives were lost off the sandbars. Nearly 200 years later, the Fire Island Lighthouse continues to provide a welcoming beacon—day or night. fireislandlighthouse.com