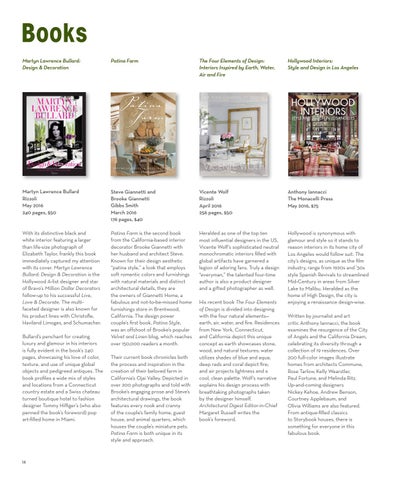 The Four Elements of Design: Interiors Inspired by Earth, Water, Air and Fire

Anthony iannacci The Monacelli Press May 2016, $75

With its distinctive black and white interior featuring a larger than life-size photograph of Elizabeth Taylor, frankly this book immediately captured my attention with its cover. Martyn Lawrence Bullard: Design &amp; Decoration is the Hollywood A-list designer and star of Bravo’s Million Dollar Decorators follow-up to his successful Live, Love &amp; Decorate. The multifaceted designer is also known for his product lines with Christofle, Haviland Limoges, and Schumacher.

Patina Farm is the second book from the California-based interior decorator Brooke Giannetti with her husband and architect Steve. Known for their design aesthetic “patina style,” a look that employs soft romantic colors and furnishings with natural materials and distinct architectural details, they are the owners of Giannetti Home, a fabulous and not-to-be-missed home furnishings store in Brentwood, California. The design power couple’s first book, Patina Style, was an offshoot of Brooke’s popular Velvet and Linen blog, which reaches over 150,000 readers a month.

Heralded as one of the top ten most influential designers in the US, Vicente Wolf’s sophisticated neutral monochromatic interiors filled with global artifacts have garnered a legion of adoring fans. Truly a design “everyman,” the talented four-time author is also a product designer and a gifted photographer as well.

Hollywood is synonymous with glamour and style so it stands to reason interiors in its home city of Los Angeles would follow suit. The city’s designs, as unique as the film industry, range from 1920s and ’30s style Spanish Revivals to streamlined Mid-Century in areas from Silver Lake to Malibu. Heralded as the home of High Design, the city is enjoying a renaissance design-wise.

Bullard’s penchant for creating luxury and glamour in his interiors is fully evident in the book’s 240 pages, showcasing his love of color, texture, and use of unique global objects and pedigreed antiques. The book profiles a wide mix of styles and locations from a Connecticut country estate and a Swiss chateau turned boutique hotel to fashion designer Tommy Hilfiger’s (who also penned the book’s foreword) pop art-filled home in Miami.

Their current book chronicles both the process and inspiration in the creation of their beloved farm in California’s Ojai Valley. Depicted in over 200 photographs and told with Brooke’s engaging prose and Steve’s architectural drawings, the book features every nook and cranny of the couple’s family home, guest house, and animal quarters, which houses the couple’s miniature pets. Patina Farm is both unique in its style and approach.

Written by journalist and art critic Anthony Iannacci, the book examines the resurgence of the City of Angels and the California Dream, celebrating its diversity through a collection of 19 residences. Over 200 full-color images illustrate homes from architects Commune, Rose Tarlow, Kelly Wearstler, Paul Fortune, and Melinda Ritz. Up-and-coming designers Nickey Kehoe, Andrew Benson, Courtney Applebaum, and Olivia Williams are also featured. From antique-filled classics to Storybook houses, there is something for everyone in this fabulous book.