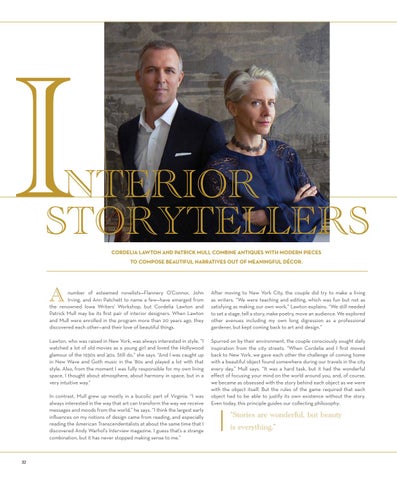 number of esteemed novelists—Flannery O’Connor, John Irving, and Ann Patchett to name a few—have emerged from the renowned Iowa Writers&#39; Workshop, but Cordelia Lawton and Patrick Mull may be its first pair of interior designers. When Lawton and Mull were enrolled in the program more than 20 years ago, they discovered each other—and their love of beautiful things.

After moving to New York City, the couple did try to make a living as writers. “We were teaching and editing, which was fun but not as satisfying as making our own work,” Lawton explains. “We still needed to set a stage, tell a story, make poetry, move an audience. We explored other avenues including my own long digression as a professional gardener, but kept coming back to art and design.”

Lawton, who was raised in New York, was always interested in style. “I watched a lot of old movies as a young girl and loved the Hollywood glamour of the 1930s and ’40s. Still do,” she says. “And I was caught up in New Wave and Goth music in the ’80s and played a lot with that style. Also, from the moment I was fully responsible for my own living space, I thought about atmosphere, about harmony in space, but in a very intuitive way.”

Spurred on by their environment, the couple consciously sought daily inspiration from the city streets. “When Cordelia and I first moved back to New York, we gave each other the challenge of coming home with a beautiful object found somewhere during our travels in the city every day,” Mull says. “It was a hard task, but it had the wonderful effect of focusing your mind on the world around you, and, of course, we became as obsessed with the story behind each object as we were with the object itself. But the rules of the game required that each object had to be able to justify its own existence without the story. Even today, this principle guides our collecting philosophy:

In contrast, Mull grew up mostly in a bucolic part of Virginia. “I was always interested in the way that art can transform the way we receive messages and moods from the world,” he says. “I think the largest early influences on my notions of design came from reading, and especially reading the American Transcendentalists at about the same time that I discovered Andy Warhol’s Interview magazine. I guess that’s a strange combination, but it has never stopped making sense to me.”

“Stories are wonderful, but beauty is everything.”

Array Magazine - Spring 2017 ARRAY Magazine brings the most interesting people, places and ideas in interior design into the homes and offices of both design professionals and consumers, featuring the best of the New York Design Center.