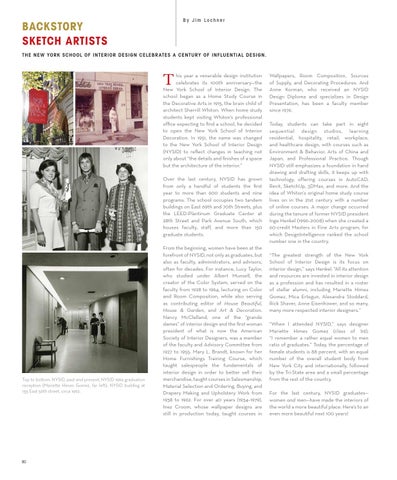 T he New York School of I nterior D esign celebrates a century of influential design .

his year a venerable design institution celebrates its 100th anniversary—the New York School of Interior Design. The school began as a Home Study Course in the Decorative Arts in 1915, the brain child of architect Sherrill Whiton. When home study students kept visiting Whiton’s professional office expecting to find a school, he decided to open the New York School of Interior Decoration. In 1951, the name was changed to the New York School of Interior Design (NYSID) to reflect changes in teaching not only about “the details and finishes of a space but the architecture of the interior.” Over the last century, NYSID has grown from only a handful of students the first year to more than 600 students and nine programs. The school occupies two tandem buildings on East 69th and 70th Streets, plus the LEED-Plantinum Graduate Center at 28th Street and Park Avenue South, which houses faculty, staff, and more than 150 graduate students.

From the beginning, women have been at the forefront of NYSID, not only as graduates, but also as faculty, administrators, and advisors, often for decades. For instance, Lucy Taylor, who studied under Albert Munsell, the creator of the Color System, served on the faculty from 1928 to 1964, lecturing on Color and Room Composition, while also serving as contributing editor of House Beautiful, House &amp; Garden, and Art &amp; Decoration. Nancy McClelland, one of the “grande dames” of interior design and the first woman president of what is now the American Society of Interior Designers, was a member of the faculty and Advisory Committee from 1927 to 1955. Mary L. Brandt, known for her Home Furnishings Training Course, which taught salespeople the fundamentals of interior design in order to better sell their merchandise, taught courses in Salesmanship, Material Selection and Ordering, Buying, and Drapery Making and Upholstery Work from 1938 to 1962. For over 40 years (1934–1979), Inez Croom, whose wallpaper designs are still in production today, taught courses in

Wallpapers, Room Composition, Sources of Supply, and Decorating Procedures. And Anne Korman, who received an NYSID Design Diploma and specializes in Design Presentation, has been a faculty member since 1976. Today, students can take part in eight sequential design studios, learning residential, hospitality, retail, workplace, and healthcare design, with courses such as Environment &amp; Behavior, Arts of China and Japan, and Professional Practice. Though NYSID still emphasizes a foundation in hand drawing and drafting skills, it keeps up with technology, offering courses in AutoCAD, Revit, SketchUp, 3DMax, and more. And the idea of Whiton’s original home study course lives on in the 21st century with a number of online courses. A major change occurred during the tenure of former NYSID president Inge Henkel (1996–2008) when she created a 60-credit Masters in Fine Arts program, for which DesignIntelligence ranked the school number one in the country. “The greatest strength of the New York School of Interior Design is its focus on interior design,” says Henkel. “All its attention and resources are invested in interior design as a profession and has resulted in a roster of stellar alumni, including Mariette Himes Gomez, Mica Ertegun, Alexandra Stoddard, Rick Shaver, Anne Eisenhower, and so many, many more respected interior designers.” “When I attended NYSID,” says designer Mariette Himes Gomez (class of ’69), “I remember a rather equal women to men ratio of graduates.” Today, the percentage of female students is 88 percent, with an equal number of the overall student body from New York City and internationally, followed by the Tri-State area and a small percentage from the rest of the country. For the last century, NYSID graduates— women and men—have made the interiors of the world a more beautiful place. Here’s to an even more beautiful next 100 years!

Array Magazine - Spring 2016 ARRAY Magazine brings the most interesting people, places and ideas in interior design into the homes and offices of both design professionals and consumers, featuring the best of the New York Design Center.