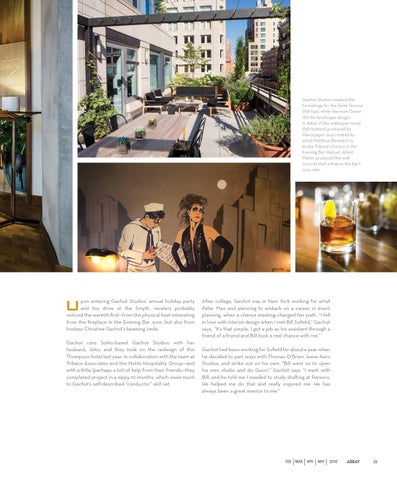 Gachot Studios created the furnishings for the Suite Terrace (left top), while Harrison Green did the landscape design. A detail of the wallpaper mural (left bottom) produced by Flavorpaper and created by artist Matthew Benedict to evoke Tribeca’s history in the Evening Bar (below). Allied Maker produced the wall sconces that enhance the bar’s cozy vibe.

pon entering Gachot Studios’ annual holiday party and toy drive at the Smyth, revelers probably noticed the warmth first—from the physical heat emanating from the fireplace in the Evening Bar, sure, but also from hostess Christine Gachot’s beaming smile. Gachot runs SoHo-based Gachot Studios with her husband, John, and they took on the redesign of this Thompson hotel last year. In collaboration with the team at Tribeca Associates and the NoHo Hospitality Group—and with a little (perhaps a lot) of help from their friends—they completed project in a zippy 10 months, which owes much to Gachot’s self-described “conductor” skill set.

After college, Gachot was in New York working for artist Peter Max and planning to embark on a career in event planning, when a chance meeting changed her path. “I fell in love with interior design when I met Bill Sofield,” Gachot says. “It’s that simple. I got a job as his assistant through a friend of a friend and Bill took a real chance with me.” Gachot had been working for Sofield for about a year when he decided to part ways with Thomas O’Brien, leave Aero Studios, and strike out on his own. “Bill went on to open his own studio and do Gucci,” Gachot says “I went with Bill, and he told me I needed to study drafting at Parsons. He helped me do that and really inspired me. He has always been a great mentor to me.”

Array Magazine - Spring 2016 ARRAY Magazine brings the most interesting people, places and ideas in interior design into the homes and offices of both design professionals and consumers, featuring the best of the New York Design Center.