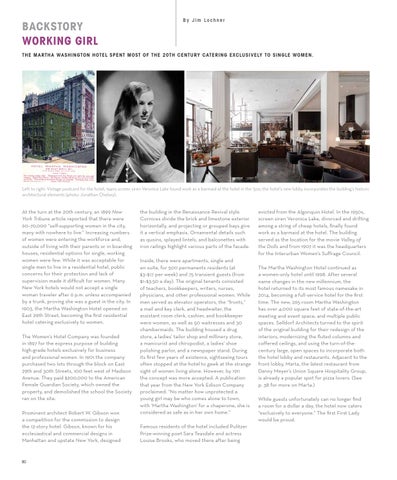 At the turn at the 20th century, an 1899 New York Tribune article reported that there were 60–70,000 “self-supporting women in the city, many with nowhere to live.” Increasing numbers of women were entering the workforce and, outside of living with their parents or in boarding houses, residential options for single, working women were few. While it was acceptable for single men to live in a residential hotel, public concerns for their protection and lack of supervision made it difficult for women. Many New York hotels would not accept a single woman traveler after 6 p.m. unless accompanied by a trunk, proving she was a guest in the city. In 1903, the Martha Washington Hotel opened on East 29th Street, becoming the first residential hotel catering exclusively to women. The Women’s Hotel Company was founded in 1897 for the express purpose of building high-grade hotels exclusively for business and professional women. In 1901 the company purchased two lots through the block on East 29th and 30th Streets, 100 feet west of Madison Avenue. They paid $200,000 to the American Female Guardian Society, which owned the property, and demolished the school the Society ran on the site. Prominent architect Robert W. Gibson won a competition for the commission to design the 12-story hotel. Gibson, known for his ecclesiastical and commercial designs in Manhattan and upstate New York, designed

the building in the Renaissance Revival style. Cornices divide the brick and limestone exterior horizontally, and projecting or grouped bays give it a vertical emphasis. Ornamental details such as quoins, splayed lintels, and balconettes with iron railings highlight various parts of the facade. Inside, there were apartments, single and en suite, for 500 permanents residents (at $3–$17 per week) and 75 transient guests (from $1–$3.50 a day). The original tenants consisted of teachers, bookkeepers, writers, nurses, physicians, and other professional women. While men served as elevator operators, the “fronts,” a mail and key clerk, and headwaiter, the assistant room clerk, cashier, and bookkeeper were women, as well as 50 waitresses and 30 chambermaids. The building housed a drug store, a ladies’ tailor shop and millinery store, a manicurist and chiropodist, a ladies’ shoe polishing parlor, and a newspaper stand. During its first few years of existence, sightseeing tours often stopped at the hotel to gawk at the strange sight of women living alone. However, by 1911 the concept was more accepted. A publication that year from the New York Edison Company proclaimed: “No matter how unprotected a young girl may be who comes alone to town, with ‘Martha Washington’ for a chaperone, she is considered as safe as in her own home.” Famous residents of the hotel included Pulitzer Prize-winning poet Sara Teasdale and actress Louise Brooks, who moved there after being

evicted from the Algonquin Hotel. In the 1950s, screen siren Veronica Lake, divorced and drifting among a string of cheap hotels, finally found work as a barmaid at the hotel. The building served as the location for the movie Valley of the Dolls and from 1907 it was the headquarters for the Interurban Women’s Suffrage Council. The Martha Washington Hotel continued as a women-only hotel until 1998. After several name changes in the new millennium, the hotel returned to its most famous namesake in 2014, becoming a full-service hotel for the first time. The new, 265-room Martha Washington has over 4,000 square feet of state-of-the-art meeting and event space, and multiple public spaces. Selldorf Architects turned to the spirit of the original building for their redesign of the interiors, modernizing the fluted columns and coffered ceilings, and using the turn-of-thecentury large, open spaces to incorporate both the hotel lobby and restaurants. Adjacent to the front lobby, Marta, the latest restaurant from Danny Meyer’s Union Square Hospitality Group, is already a popular spot for pizza lovers. (See p. 38 for more on Marta.) While guests unfortunately can no longer find a room for a dollar a day, the hotel now caters “exclusively to everyone.” The first First Lady would be proud.