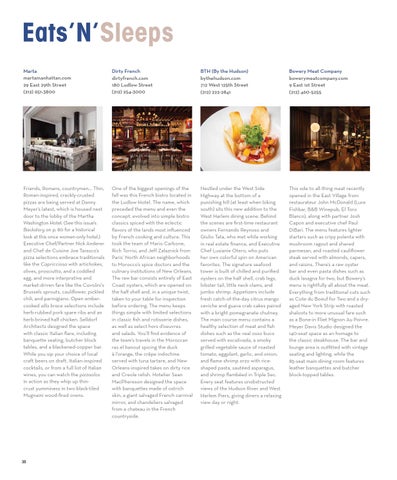 Friends, Romans, countrymen… Thin, Roman-inspired, crackly-crusted pizzas are being served at Danny Meyer’s latest, which is housed next door to the lobby of the Martha Washington Hotel. (See this issue’s Backstory on p. 80 for a historical look at this once women-only hotel.) Executive Chef/Partner Nick Anderer and Chef de Cuisine Joe Tarasco’s pizza selections embrace traditionals like the Capricciosa with artichokes, olives, prosciutto, and a coddled egg, and more interpretive and market-driven fare like the Cavolini’s Brussels sprouts, cauliflower, pickled chili, and parmigiano. Open embercooked alla brace selections include herb-rubbed pork spare ribs and an herb-brined half chicken. Selldorf Architects designed the space with classic Italian flare, including banquette seating, butcher block tables, and a blackened-copper bar. While you sip your choice of local craft beers on draft, Italian-inspired cocktails, or from a full list of Italian wines, you can watch the pizzaolos in action as they whip up thincrust yumminess in two black-tiled Mugnaini wood-fired ovens.

One of the biggest openings of the fall was this French bistro located in the Ludlow Hotel. The name, which preceded the menu and even the concept, evolved into simple bistro classics spiced with the eclectic flavors of the lands most influenced by French cooking and culture. This took the team of Mario Carbone, Rich Torrisi, and Jeff Zalaznick from Paris’ North African neighborhoods to Morocco’s spice doctors and the culinary institutions of New Orleans. The raw bar consists entirely of East Coast oysters, which are opened on the half shell and, in a unique twist, taken to your table for inspection before ordering. The menu keeps things simple with limited selections in classic fish and rotisserie dishes, as well as select hors d’oeuvres and salads. You’ll find evidence of the team’s travels in the Moroccan ras el hanout spicing the duck à l’orange, the crêpe indochine served with tuna tartare, and New Orleans-inspired takes on dirty rice and Creole relish. Hotelier Sean MacPhereson designed the space with banquettes made of ostrich skin, a giant salvaged French carnival mirror, and chandeliers salvaged from a chateau in the French countryside.

Nestled under the West Side Highway at the bottom of a punishing hill (at least when biking south) sits this new addition to the West Harlem dining scene. Behind the scenes are first-time restaurant owners Fernando Reynoso and Giulio Tata, who met while working in real estate finance, and Executive Chef Lusianie Otero, who puts her own colorful spin on American favorites. The signature seafood tower is built of chilled and purified oysters on the half shell, crab legs, lobster tail, little neck clams, and jumbo shrimp. Appetizers include fresh catch-of-the-day citrus mango ceviche and guava crab cakes paired with a bright pomegranate chutney. The main course menu contains a healthy selection of meat and fish dishes such as the veal osso buco served with escalivada, a smoky grilled vegetable sauce of roasted tomato, eggplant, garlic, and onion; and flame shrimp orzo with riceshaped pasta, sautéed asparagus, and shrimp flambéed in Triple Sec. Every seat features unobstructed views of the Hudson River and West Harlem Piers, giving diners a relaxing view day or night.

This ode to all-thing meat recently opened in the East Village from restaurateur John McDonald (Lure Fishbar, B&amp;B Winepub, El Toro Blanco), along with partner Josh Capon and executive chef Paul DiBari. The menu features lighter starters such as cripy polenta with mushroom ragout and shaved parmesan, and roasted cauliflower steak served with almonds, capers, and raisins. There’s a raw oyster bar and even pasta dishes such as duck lasagna for two, but Bowery’s menu is rightfully all about the meat. Everything from traditional cuts such as Cote du Boeuf for Two and a dryaged New York Strip with roasted shaloots to more unusual fare such as a Bone-in Fliet Mignon Au Poivre. Meyer Davis Studio designed the 140-seat space as an homage to the classic steakhouse. The bar and lounge area is outfitted with vintage seating and lighting, while the 85-seat main dining room features leather banquettes and butcher block-topped tables.