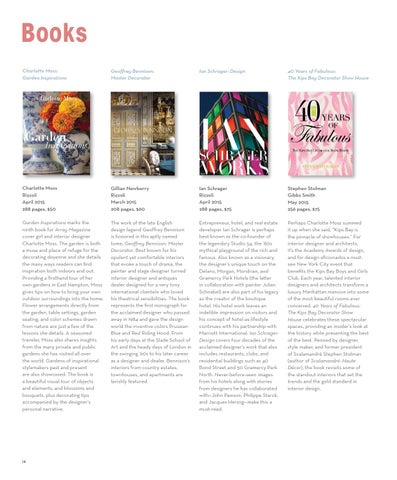 Garden Inspirations marks the ninth book for Array Magazine cover girl and interior designer Charlotte Moss. The garden is both a muse and place of refuge for the decorating doyenne and she details the many ways readers can find inspiration both indoors and out. Providing a firsthand tour of her own gardens in East Hampton, Moss gives tips on how to bring your own outdoor surroundings into the home. Flower arrangements directly from the garden, table settings, garden seating, and color schemes drawn from nature are just a few of the lessons she details. A seasoned traveler, Moss also shares insights from the many private and public gardens she has visited all over the world. Gardens of inspirational stylemakers past and present are also showcased. The book is a beautiful visual tour of objects and elements, and blossoms and bouquets, plus decorating tips accompanied by the designer’s personal narrative.

The work of the late English design legend Geoffrey Bennison is honored in this aptly named tome, Geoffrey Bennison: Master Decorator. Best known for his opulent yet comfortable interiors that evoke a touch of drama, the painter and stage designer turned interior designer and antiques dealer designed for a very tony international clientele who loved his theatrical sensibilities. The book represents the first monograph for the acclaimed designer who passed away in 1984 and gave the design world the inventive colors Prussian Blue and Red Riding Hood. From his early days at the Slade School of Art and the heady days of London in the swinging ’60s to his later career as a designer and dealer, Bennison’s interiors from country estates, townhouses, and apartments are lavishly featured.

Entrepreneur, hotel, and real estate developer Ian Schrager is perhaps best known as the co-founder of the legendary Studio 54, the ’80s mythical playground of the rich and famous. Also known as a visionary, the designer’s unique touch on the Delano, Morgan, Mondrian, and Gramercy Park Hotels (the latter in collaboration with painter Julian Schnabel) are also part of his legacy as the creator of the boutique hotel. His hotel work leaves an indelible impression on visitors and his concept of hotel-as-lifestyle continues with his partnership with Marriott International. Ian Schrager: Design covers four decades of the acclaimed designer’s work that also includes restaurants, clubs, and residential buildings such as 40 Bond Street and 50 Gramercy Park North. Never-before-seen images from his hotels along with stories from designers he has collaborated with—John Pawson, Philippe Starck, and Jacques Herzog—make this a must-read.

Perhaps Charlotte Moss summed it up when she said, “Kips Bay is the pinnacle of showhouses.” For interior designer and architects, it’s the Academy Awards of design, and for design aficionados a mustsee New York City event that benefits the Kips Bay Boys and Girls Club. Each year, talented interior designers and architects transform a luxury Manhattan mansion into some of the most beautiful rooms ever conceived. 40 Years of Fabulous: The Kips Bay Decorator Show House celebrates these spectacular spaces, providing an insider’s look at the history while presenting the best of the best. Penned by designer, style maker, and former president of Scalamandré Stephen Stolman (author of Scalamandré: Haute Décor), the book revisits some of the standout interiors that set the trends and the gold standard in interior design.