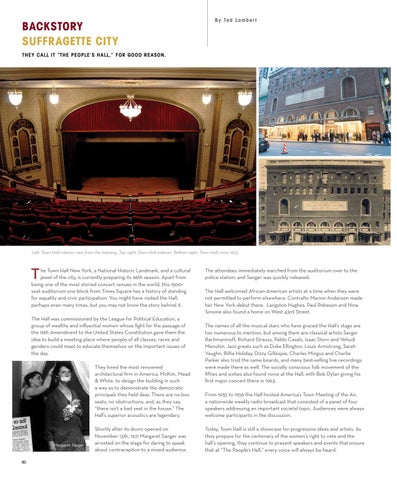 he Town Hall New York, a National Historic Landmark, and a cultural jewel of the city, is currently preparing its 96th season. Apart from being one of the most storied concert venues in the world, this 1500seat auditorium one block from Times Square has a history of standing for equality and civic participation. You might have visited the Hall, perhaps even many times, but you may not know the story behind it. The Hall was commissioned by the League for Political Education, a group of wealthy and influential women whose fight for the passage of the 19th Amendment to the United States Constitution gave them the idea to build a meeting place where people of all classes, races and genders could meet to educate themselves on the important issues of the day. They hired the most renowned architectural firm in America, McKim, Mead &amp; White, to design the building in such a way as to demonstrate the democratic principals they held dear. There are no box seats, no obstructions, and, as they say, “there isn’t a bad seat in the house.” The Hall’s superior acoustics are legendary. Shortly after its doors opened on November 13th, 1921 Margaret Sanger was arrested on the stage for daring to speak about contraception to a mixed audience.

The attendees immediately marched from the auditorium over to the police station, and Sanger was quickly released. The Hall welcomed African-American artists at a time when they were not permitted to perform elsewhere. Contralto Marion Anderson made her New York debut there. Langston Hughes, Paul Robeson and Nina Simone also found a home on West 43rd Street. The names of all the musical stars who have graced the Hall’s stage are too numerous to mention, but among them are classical artists Sergei Rachmaninoff, Richard Strauss, Pablo Casals, Isaac Stern and Yehudi Menuhin. Jazz greats such as Duke Ellington, Louis Armstrong, Sarah Vaughn, Billie Holiday, Dizzy Gillespie, Charles Mingus and Charlie Parker also trod the same boards, and many best-selling live recordings were made there as well. The socially conscious folk movement of the fifties and sixties also found voice at the Hall, with Bob Dylan giving his first major concert there in 1963. From 1935 to 1956 the Hall hosted America’s Town Meeting of the Air, a nationwide weekly radio broadcast that consisted of a panel of four speakers addressing an important societal topic. Audiences were always welcome participants in the discussion. Today, Town Hall is still a showcase for progressive ideas and artists. As they prepare for the centenary of the women’s right to vote and the hall’s opening, they continue to present speakers and events that ensure that at “The People’s Hall,” every voice will always be heard.

Array Magazine - Fall 2017 ARRAY Magazine brings the most interesting people, places and ideas in interior design into the homes and offices of both design professionals and consumers, featuring the best of the New York Design Center.