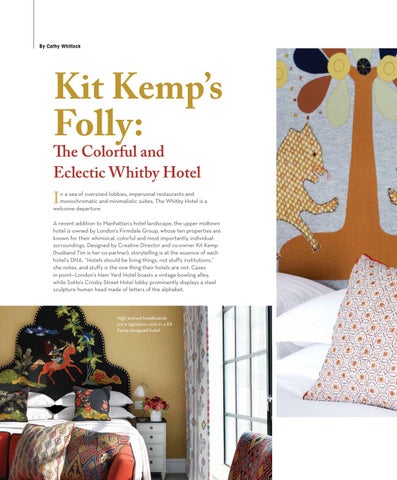 n a sea of oversized lobbies, impersonal restaurants and monochromatic and minimalistic suites, The Whitby Hotel is a welcome departure. A recent addition to Manhattan’s hotel landscape, the upper midtown hotel is owned by London’s Firmdale Group, whose ten properties are known for their whimsical, colorful and most importantly, individual surroundings. Designed by Creative Director and co-owner Kit Kemp (husband Tim is her co-partner), storytelling is at the essence of each hotel’s DNA. “Hotels should be living things, not stuffy institutions,” she notes, and stuffy is the one thing their hotels are not. Cases in point—London’s Ham Yard Hotel boasts a vintage bowling alley, while SoHo’s Crosby Street Hotel lobby prominently displays a steel sculpture human head made of letters of the alphabet.

High arched headboards are a signature note in a Kit Kemp designed hotel.

Array Magazine - Fall 2017 ARRAY Magazine brings the most interesting people, places and ideas in interior design into the homes and offices...

Array Magazine - Fall 2017 ARRAY Magazine brings the most interesting people, places and ideas in interior design into the homes and offices...