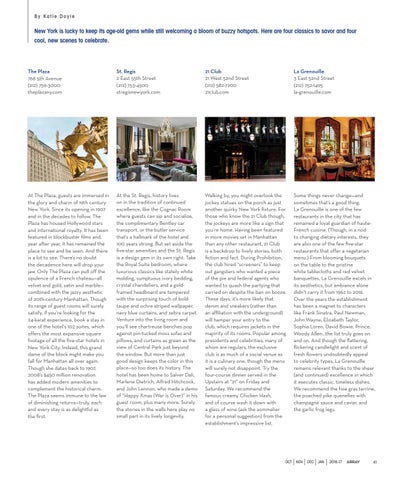 New York is lucky to keep its age-old gems while still welcoming a bloom of buzzy hotspots. Here are four classics to savor and four cool, new scenes to celebrate.

At The Plaza, guests are immersed in the glory and charm of 19th century New York. Since its opening in 1907 and in the decades to follow, The Plaza has housed Hollywood stars and international royalty. It has been featured in blockbuster films and, year after year, it has remained the place to see and be seen. And there is a lot to see. There’s no doubt the decadence here will drop your jaw. Only The Plaza can pull off the opulence of a French chateau—all velvet and gold, satin and marble— combined with the jazzy aesthetic of 20th-century Manhattan. Though its range of guest rooms will surely satisfy, if you’re looking for the 24-karat experience, book a stay in one of the hotel’s 102 suites, which offers the most expansive square footage of all the five-star hotels in New York City. Indeed, this grand dame of the block might make you fall for Manhattan all over again. Though she dates back to 1907, 2008’s $450 million renovation has added modern amenities to complement the historical charm. The Plaza seems immune to the law of diminishing returns—truly, each and every stay is as delightful as the first.

At the St. Regis, history lives on in the tradition of continued excellence, like the Cognac Room where guests can sip and socialize, the complimentary Bentley car transport, or the butler service that’s a hallmark of the hotel and 100 years strong. But set aside the five-star amenities and the St. Regis is a design gem in its own right. Take the Royal Suite bedroom, where luxurious classics like stately white molding, sumptuous ivory bedding, crystal chandeliers, and a goldframed headboard are tempered with the surprising touch of bold taupe and ochre striped wallpaper, navy blue curtains, and zebra carpet. Venture into the living room and you’ll see chartreuse benches pop against pin-tucked moss sofas and pillows, and curtains as green as the view of Central Park just beyond the window. But more than just good design keeps the color in this place—so too does its history. The hotel has been home to Salver Dali, Marlene Dietrich, Alfred Hitchcock, and John Lennon, who made a demo of “Happy Xmas (War is Over)” in his guest room, plus many more. Surely the stories in the walls here play no small part in its lively longevity.

Walking by, you might overlook the jockey statues on the porch as just another quirky New York fixture. For those who know the 21 Club though, the jockeys are more like a sign that you’re home. Having been featured in more movies set in Manhattan than any other restaurant, 21 Club is a backdrop to lively stories, both fiction and fact. During Prohibition, the club hired “screeners” to keep out gangsters who wanted a piece of the pie and federal agents who wanted to quash the partying that carried on despite the ban on booze. These days, it’s more likely that denim and sneakers (rather than an affiliation with the underground) will hamper your entry to the club, which requires jackets in the majority of its rooms. Popular among presidents and celebrities, many of whom are regulars, the exclusive club is as much of a social venue as it is a culinary one, though the menu will surely not disappoint. Try the four-course dinner served in the Upstairs at “21” on Friday and Saturday. We recommend the famous creamy Chicken Hash, and of course wash it down with a glass of wine (ask the sommelier for a personal suggestion) from the establishment’s impressive list.

Some things never change—and sometimes that’s a good thing. La Grenouille is one of the few restaurants in the city that has remained a loyal guardian of hauteFrench cuisine. (Though, in a nod to changing dietary interests, they are also one of the few five-star restaurants that offer a vegetarian menu.) From blooming bouquets on the table to the pristine white tablecloths and red velvet banquettes, La Grenouille excels in its aesthetics, but ambiance alone didn’t carry it from 1962 to 2016. Over the years the establishment has been a magnet to characters like Frank Sinatra, Paul Newman, John Wayne, Elizabeth Taylor, Sophia Loren, David Bowie, Prince, Woody Allen…the list truly goes on and on. And though the flattering, flickering candlelight and scent of fresh flowers undoubtedly appeal to celebrity types, La Grenouille remains relevant thanks to the sheer (and continued) excellence in which it executes classic, timeless dishes. We recommend the foie gras terrine, the poached pike quenelles with champagne sauce and caviar, and the garlic frog legs.