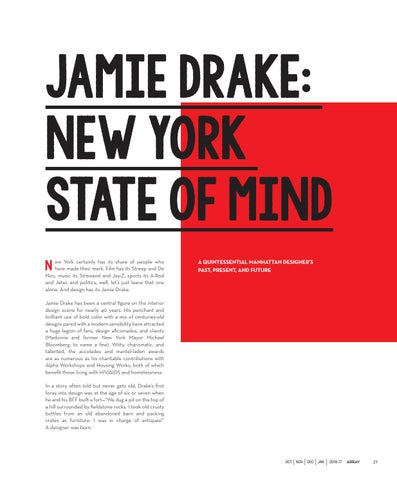 JAMIE DRAKE: New York State of Mind ew York certainly has its share of people who have made their mark. Film has its Streep and De Niro, music its Streisand and Jay-Z, sports its A-Rod and Jeter, and politics, well, let’s just leave that one alone. And design has its Jamie Drake.

A QUINTESSENTIAL MANHATTAN DESIGNER’S PAST, PRESENT, AND FUTURE

Jamie Drake has been a central figure on the interior design scene for nearly 40 years. His penchant and brilliant use of bold color with a mix of centuries-old designs pared with a modern sensibility have attracted a huge legion of fans, design aficionados, and clients (Madonna and former New York Mayor Michael Bloomberg, to name a few). Witty, charismatic, and talented, the accolades and mantel-laden awards are as numerous as his charitable contributions with Alpha Workshops and Housing Works, both of which benefit those living with HIV/AIDS and homelessness. In a story often told but never gets old, Drake’s first foray into design was at the age of six or seven when he and his BFF built a fort—“We dug a pit on the top of a hill surrounded by fieldstone rocks. I took old crusty bottles from an old abandoned barn and packing crates as furniture. I was in charge of antiques!” A designer was born.

Array Magazine - Fall 2016 ARRAY Magazine brings the most interesting people, places and ideas in interior design into the homes and offices...

Array Magazine - Fall 2016 ARRAY Magazine brings the most interesting people, places and ideas in interior design into the homes and offices...