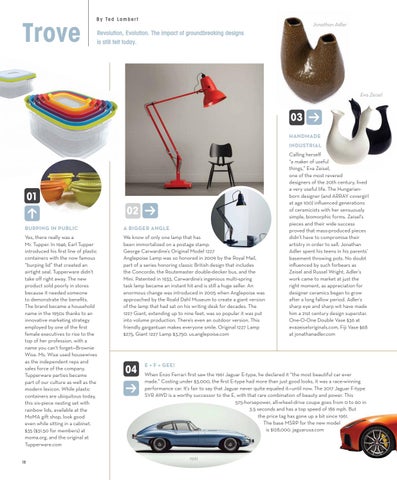 Yes, there really was a Mr. Tupper. In 1946, Earl Tupper introduced his first line of plastic containers with the now famous “burping lid” that created an airtight seal. Tupperware didn’t take off right away. The new product sold poorly in stores because it needed someone to demonstrate the benefits. The brand became a household name in the 1950s thanks to an innovative marketing strategy employed by one of the first female executives to rise to the top of her profession, with a name you can’t forget—Brownie Wise. Ms. Wise used housewives as the independent reps and sales force of the company. Tupperware parties became part of our culture as well as the modern lexicon. While plastic containers are ubiquitous today, this six-piece nesting set with rainbow lids, available at the MoMA gift shop, look good even while sitting in a cabinet. $35 ($31.50 for members) at moma.org, and the original at Tupperware.com

We know of only one lamp that has been immortalized on a postage stamp. George Carwardine’s Original Model 1227 Anglepoise Lamp was so honored in 2009 by the Royal Mail, part of a series honoring classic British design that includes the Concorde, the Routemaster double-decker bus, and the Mini. Patented in 1933, Carwardine’s ingenious multi-spring task lamp became an instant hit and is still a huge seller. An enormous change was introduced in 2005 when Anglepoise was approached by the Roald Dahl Museum to create a giant version of the lamp that had sat on his writing desk for decades. The 1227 Giant, extending up to nine feet, was so popular it was put into volume production. There’s even an outdoor version. This friendly gargantuan makes everyone smile. Original 1227 Lamp $275, Giant 1227 Lamp $3,750. us.anglepoise.com

Calling herself “a maker of useful things,” Eva Zeisel, one of the most revered designers of the 20th century, lived a very useful life. The Hungarianborn designer (and ARRAY covergirl at age 100) influenced generations of ceramicists with her sensuously simple, biomorphic forms. Zeisel’s pieces and their wide success proved that mass-produced pieces didn’t have to compromise their artistry in order to sell. Jonathan Adler spent his teens in his parents’ basement throwing pots. No doubt influenced by such forbears as Zeisel and Russel Wright, Adler’s work came to market at just the right moment, as appreciation for designer ceramics began to grow after a long fallow period. Adler’s sharp eye and sharp wit have made him a 21st century design superstar. One-O-One Double Vase $36 at evazeiseloriginals.com, Fiji Vase $68 at jonathanadler.com

E + F = Gee! When Enzo Ferrari first saw the 1961 Jaguar E-type, he declared it “the most beautiful car ever made.” Costing under $3,000, the first E-type had more than just good looks, it was a race-winning performance car. It’s fair to say that Jaguar never quite equaled it—until now. The 2017 Jaguar F-type SVR AWD is a worthy successor to the E, with that rare combination of beauty and power. This 575-horsepower, all-wheel-drive coupe goes from 0 to 60 in 3.5 seconds and has a top speed of 186 mph. But the price tag has gone up a bit since 1961. The base MSRP for the new model is $128,000. jaguarusa.com