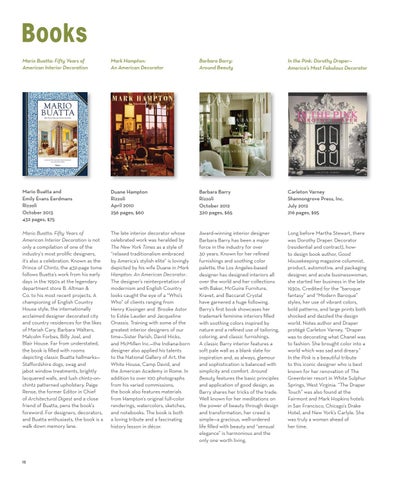 In the Pink: Dorothy Draper— America’s Most Fabulous Decorator

Mario Buatta: Fifty Years of American Interior Decoration is not only a compilation of one of the industry’s most prolific designers, it’s also a celebration. Known as the Prince of Chintz, the 432-page tome follows Buatta’s work from his early days in the 1950s at the legendary department store B. Altman &amp; Co. to his most recent projects. A championing of English Country House style, the internationally acclaimed designer decorated city and country residences for the likes of Mariah Cary, Barbara Walters, Malcolm Forbes, Billy Joel, and Blair House. Far from understated, the book is filled with rooms depicting classic Buatta hallmarks— Staffordshire dogs, swag and jabot window treatments, brightly lacquered walls, and lush chintz-onchintz patterned upholstery. Paige Rense, the former Editor in Chief of Architectural Digest and a close friend of Buatta, pens the book’s foreword. For designers, decorators, and Buatta enthusiasts, the book is a walk down memory lane.

The late interior decorator whose celebrated work was heralded by The New York Times as a style of “relaxed traditionalism embraced by America’s stylish elite” is lovingly depicted by his wife Duane in Mark Hampton: An American Decorator. The designer’s reinterpretation of modernism and English Country looks caught the eye of a “Who’s Who” of clients ranging from Henry Kissinger and Brooke Astor to Estée Lauder and Jacqueline Onassis. Training with some of the greatest interior designers of our time—Sister Parish, David Hicks, and McMillen Inc.—the Indiana-born designer also applied his talents to the National Gallery of Art, the White House, Camp David, and the American Academy in Rome. In addition to over 100 photographs from his varied commissions, the book also features materials from Hampton’s original full-color renderings, watercolors, sketches, and notebooks. The book is both a loving tribute and a fascinating history lesson in décor.

Award-winning interior designer Barbara Barry has been a major force in the industry for over 30 years. Known for her refined furnishings and soothing color palette, the Los Angeles-based designer has designed interiors all over the world and her collections with Baker, McGuire Furniture, Kravet, and Baccarat Crystal have garnered a huge following. Barry’s first book showcases her trademark feminine interiors filled with soothing colors inspired by nature and a refined use of tailoring, coloring, and classic furnishings. A classic Barry interior features a soft pale wall as a blank slate for inspiration and, as always, glamour and sophistication is balanced with simplicity and comfort. Around Beauty features the basic principles and application of good design, as Barry shares her tricks of the trade. Well known for her meditations on the power of beauty through design and transformation, her creed is simple—a gracious, well-ordered life filled with beauty and “sensual elegance” is harmonious and the only one worth living.

Long before Martha Stewart, there was Dorothy Draper. Decorator (residential and contract), howto design book author, Good Housekeeping magazine columnist, product, automotive, and packaging designer, and acute businesswoman, she started her business in the late 1930s. Credited for the “baroque fantasy” and “Modern Baroque” styles, her use of vibrant colors, bold patterns, and large prints both shocked and dazzled the design world. Notes author and Draper protégé Carleton Varney, “Draper was to decorating what Chanel was to fashion. She brought color into a world which was sad and dreary.” In the Pink is a beautiful tribute to this iconic designer who is best known for her renovation of The Greenbrier resort in White Sulphur Springs, West Virginia. “The Draper Touch” was also found at the Fairmont and Mark Hopkins hotels in San Francisco, Chicago’s Drake Hotel, and New York’s Carlyle. She was truly a woman ahead of her time.