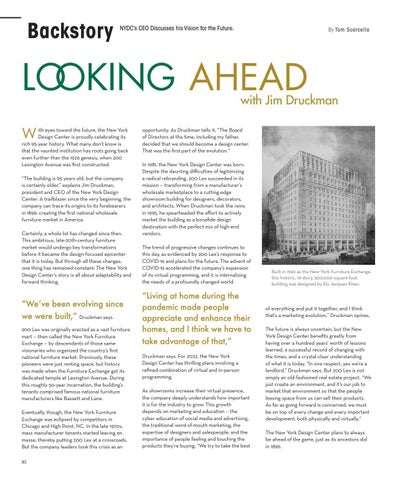 NYDC’s CEO Discusses his Vision for the Future.

ith eyes toward the future, the New York Design Center is proudly celebrating its rich 95-year history. What many don’t know is that the vaunted institution has roots going back even further than the 1926 genesis, when 200 Lexington Avenue was first constructed. “The building is 95 years old, but the company is certainly older,” explains Jim Druckman, president and CEO of the New York Design Center. A trailblazer since the very beginning, the company can trace its origins to its forebearers in 1896: creating the first national wholesale furniture market in America. Certainly, a whole lot has changed since then. This ambitious, late-20th-century furniture market would undergo key transformations before it became the design-focused epicenter that it is today. But through all these changes, one thing has remained constant: The New York Design Center’s story is all about adaptability and forward thinking.

“We’ve been evolving since we were built,” Druckman says. 200 Lex was originally erected as a vast furniture mart -- then called the New York Furniture Exchange -- by descendants of those same visionaries who organized the country’s first national furniture market. Previously, these pioneers were just renting space, but history was made when the Furniture Exchange got its dedicated temple at Lexington Avenue. During this roughly 50-year incarnation, the building’s tenants comprised famous national furniture manufacturers like Bassett and Lane. Eventually, though, the New York Furniture Exchange was eclipsed by competitors in Chicago and High Point, NC. In the late 1970s, mass manufacturer tenants started leaving en masse, thereby putting 200 Lex at a crossroads. But the company leaders took this crisis as an 80

opportunity. As Druckman tells it, “The Board of Directors at the time, including my father, decided that we should become a design center. That was the first part of the evolution.” In 1981, the New York Design Center was born. Despite the daunting difficulties of legitimizing a radical rebranding, 200 Lex succeeded in its mission -- transforming from a manufacturer’s wholesale marketplace to a cutting-edge showroom building for designers, decorators, and architects. When Druckman took the reins in 1995, he spearheaded the effort to actively market the building as a bonafide design destination with the perfect mix of high-end vendors. The trend of progressive changes continues to this day, as evidenced by 200 Lex’s response to COVID-19 and plans for the future. The advent of COVID-19 accelerated the company’s expansion of its virtual programming, and it is internalizing the needs of a profoundly changed world.

“Living at home during the pandemic made people appreciate and enhance their homes, and I think we have to take advantage of that,” Druckman says. For 2022, the New York Design Center has thrilling plans involving a refined combination of virtual and in-person programming. As showrooms increase their virtual presence, the company deeply understands how important it is for the industry to grow. This growth depends on marketing and education -- the cyber education of social media and advertising, the traditional word-of-mouth marketing, the expertise of designers and salespeople, and the importance of people feeling and touching the products they’re buying. “We try to take the best

Built in 1926 as the New York Furniture Exchange, this historic, 16-story, 500,000-square-foot building was designed by Ely Jacques Khan.

of everything and put it together, and I think that’s a marketing evolution,” Druckman opines. The future is always uncertain, but the New York Design Center benefits greatly from having over a hundred years’ worth of lessons learned, a successful record of changing with the times, and a crystal-clear understanding of what it is today. “In one respect, yes we’re a landlord,” Druckman says. But 200 Lex is not simply an old-fashioned real estate project. “We just create an environment, and it’s our job to market that environment so that the people leasing space from us can sell their products. As far as going forward is concerned, we must be on top of every change and every important development, both physically and virtually.” The New York Design Center plans to always be ahead of the game, just as its ancestors did in 1896.

Array Magazine - Fall 2021. ARRAY Magazine brings the most interesting people, places and ideas in interior design into the homes and office...

Array Magazine - Fall 2021. ARRAY Magazine brings the most interesting people, places and ideas in interior design into the homes and office...